The Church At War Conference

We were honoured to have special guest Pastor Tobias Riemenschneider join us at the conference all the way from Frankfurt, Germany. Here is a recording of him bringing greetings from his church in Frankfurt and providing a brief update on the Church in Germany.

Pastor Tobias is one of the authors of the Frankfurt Declaration (https://frankfurtdeclaration.com/), signed by many notable pastors and Christian leaders.

Isaac Watts - "The Ruin of Antichrist"

Here is a recording of TBC’s 1st and 2nd Services combined singing a little known hymn text by 17th/18th Century hymn writer Isaac Watts. We resurrected this old hymn and sung it together at the conference.

Watts wrote many beloved historical hymns such as Joy to the World, I Sing the Mighty Power of God, and When I Survey the Wondrous Cross. His father was a contemporary of John Bunyan and was, like Bunyan, twice incarcerated for his non-conformist faith. Watts was a teenager when Bunyan died and was undoubtedly influenced by his life and ministry. Drawing from Isaiah 63:4-7, and perhaps with Bunyan’s book “Of Antichrist and His Ruin” in mind, Isaac Watts writes of God’s ability to defeat the spirit of antichrist in any age and ends the text with a refrain of praise from the people of God to their deliverer.

For more info and for song and lyric sheets, checkout this blog post from John Maggs. 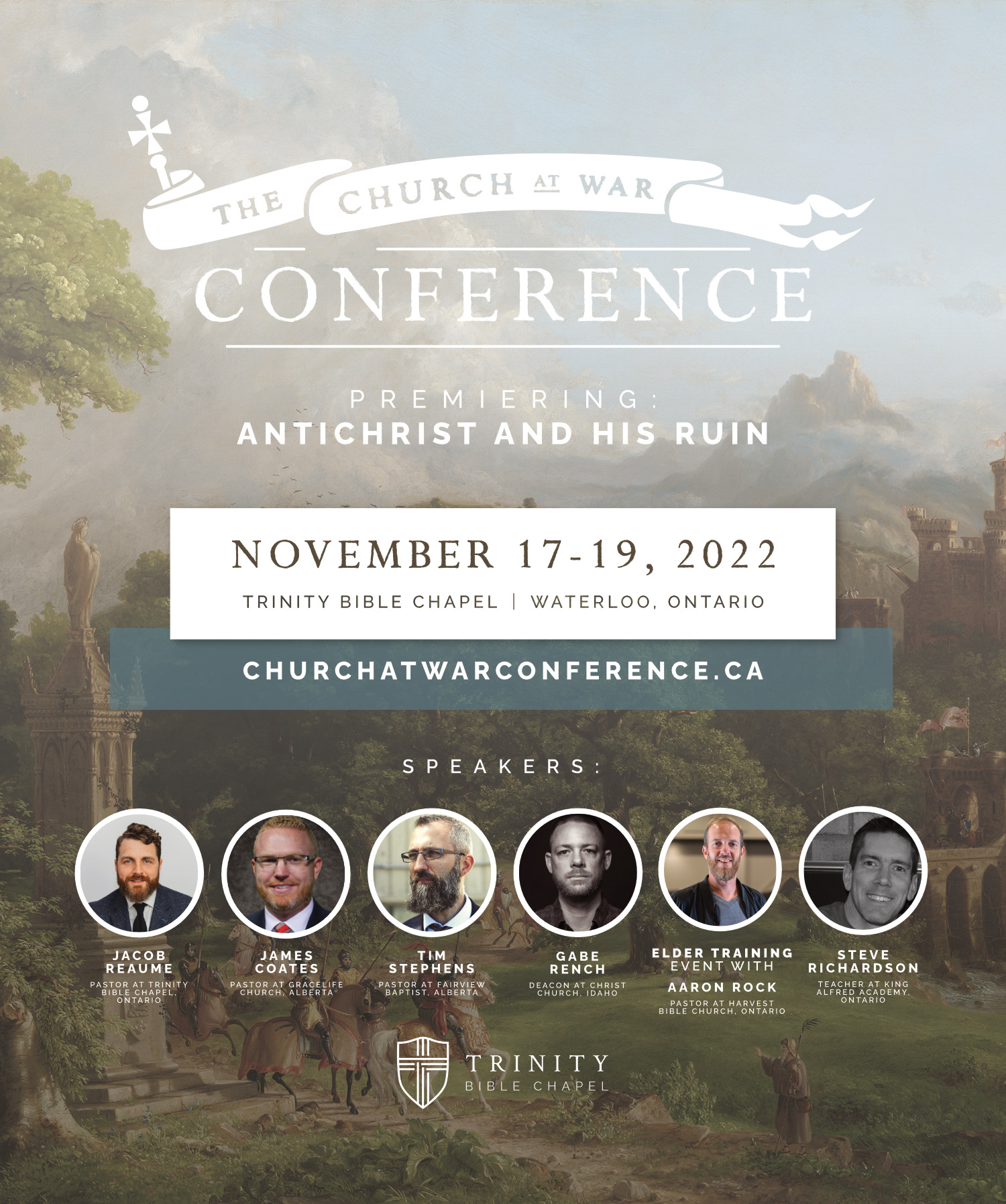 The state’s declaration of war against the church is the substantial fuel of a combustible environment. In this, the church must be a blazing torch, while firing back.

Join us as we offer strategy and hope for a church at war, while premiering the anticipated full-length feature documentary, Antichrist and His Ruin. 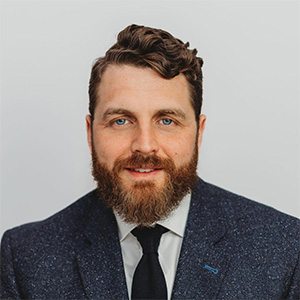 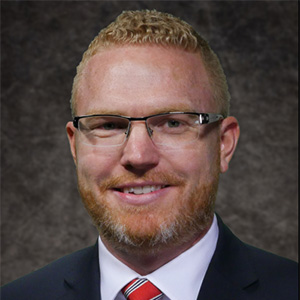 James Coates is the pastor-teacher of GraceLife Church in Edmonton, Canada. He graduated with MDiv and DMin degrees from The Master’s Seminary. He and his wife, Erin, have two sons. 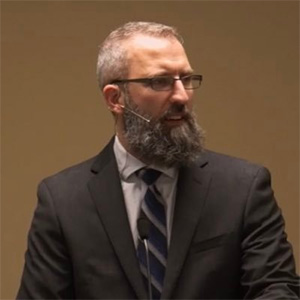 Tim Stephens is the pastor of Fairview Baptist Church. He started his ministry in January 2014. Tim grew up on a farm in Eastern Ontario and graduated with a Computer Engineering degree from Queen’s University and a Masters of Divinity degree from Detroit Baptist Theological Seminary. He is happily married to Raquel and they have eight children. Prior to serving at Fairview, Tim served as an assistant pastor at Emmanuel Baptist Church in Windsor, Ontario. 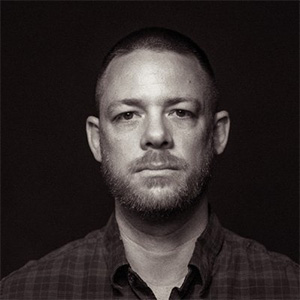 Gabriel Rench was born in the Promised Land – Texas. Six states later, he ended up in Moscow, Idaho, where he graduated from the University of Idaho. He has also attended Greyfriars Hall, the pastoral training program at New Saint Andrews. He is one of the hosts of the CrossPolitic podcast. 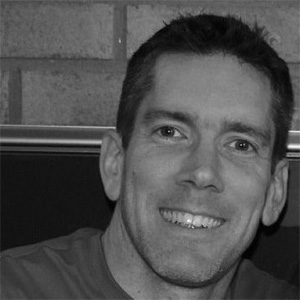 Steve is a missionary kid (and grandkid), a husband and father, a reader of revival history, reformed theology and puritan works. He is an ordained minister with Vanguard Presbytery and currently teaches at King Alfred Academy. 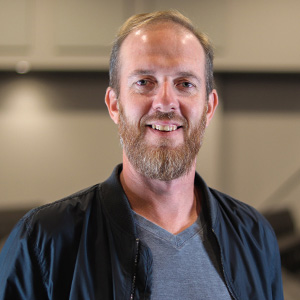 Aaron is the Founding & Lead Pastor at Harvest Windsor, where he has served since 2001. He has served as a college & seminary professor. He is married to Susie and dad to five children. 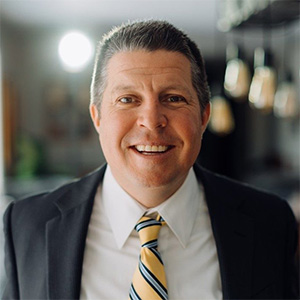 Michael did his undergraduate studies in Pastoral Ministry (Heritage College, Cambridge, ON), earned his Master’s degree with a focus in New Testament and Ethics (Gordon Conwell Theological Seminary), and holds a Doctor of Ministry Degree (Trinity Evangelical Divinity School). Michael has over 20 years of pastoral ministry experience, including international missions experience in Mozambique. 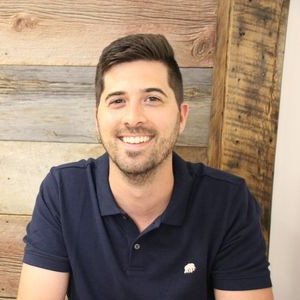 Nathanael and his wife Colleen came to pastor Crossroads Alliance Church in August of 2013. Nate graduated from the University of the Western Ontario with a degree in English Literature and received his pastoral training from Emmanuel Bible College. He spent five years in youth ministry before participating in a two year apprenticeship program at West London Alliance church under the tutelage of Rev. Mike Wilkins. Nate loves to teach the word of God and has a passion to see God’s people take their responsibility to study scripture, to make disciples of all nations and to serve others seriously. 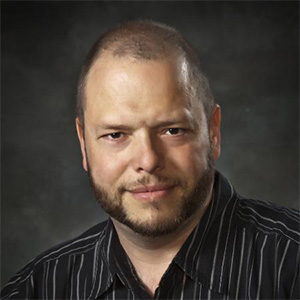 Tony Costa has earned a B.A. and an M.A. in the study of religion from the University of Toronto, and a Ph.D in theology and New Testament from Radboud University in the Netherlands. Tony is also a member of the Society of Biblical Literature, the Evangelical Theological Society and the Evangelical Philosophical Society. His area of expertise is biblical and systematic theology, cults, the New Age Movement, and comparative world religions. Tony is also an ordained minister. As a Christian apologist, Dr. Costa gives reasons for the valid belief in Christianity, and also advocates the unique claims of Jesus Christ. 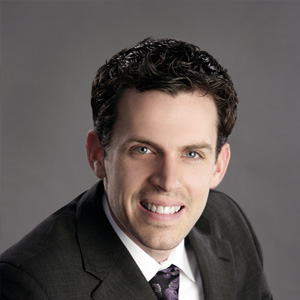 André Schutten is a constitutional lawyer and Director of Law & Public Policy with the Association for Reformed Political Action, a Canadian Christian advocacy organization rooted in the Reformed tradition, seeking to winsomely engage our civil governments by shining the light of God’s word into law and politics. André represented ARPA Canada as an intervener at the Supreme Court of Canada in the 2016 Carter case and as a participant in various government consultations and as a witness to multiple Parliamentary committees for Bill C-14 in 2016 and Bill C-7 in 2020. 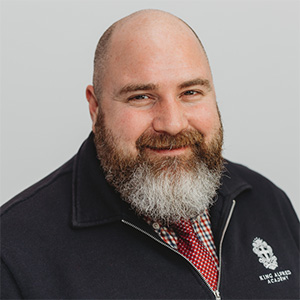 Randy was born in Northern Ontario and grew up in the Waterloo Region. He graduated from the University of Waterloo and completed Teacher’s College through Nipissing University. He soon after felt the call to ministry and began serving at Trinity Bible Chapel and graduated from Heritage Theological Seminary with a Master of Divinity in 2018. He has a passion for discipling kids showing children the glories of the Lord found in the Bible. Randy serves as the headmaster of King Alfred Academy, TBC’s Classical Christian School. 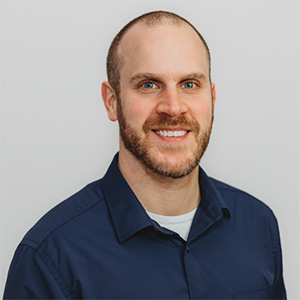 Will grew up in Oakville, Ontario and moved to the Waterloo Region in September 2006 for his studies at Wilfrid Laurier University. He graduated from university in August 2011 with a BBA and a BSc in Computer Science. He completed his Master of Divinity degree through Liberty Baptist Theological Seminary in 2017. He has been on staff at TBC since September 2011. Will has a passion to see God glorified through the fulfillment of the Great Commission (Matt. 28:16-20) and longs for the day when every tribe, tongue, and nation will be reached with the gospel message. 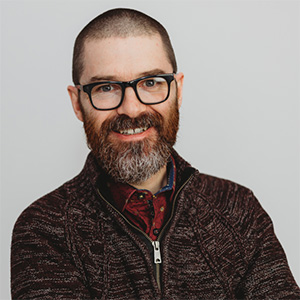 After growing up in Northern Ontario and New Mexico, John completed his undergrad in music at Northland College in Wisconsin. An additional year in the Jazz Studies program at Humber Lakeshore brought him to Toronto where he taught instrumental music, geography and history at Queensway Christian College for six years. While the final few courses of his theological studies are currently on hold during this busy season, he is hoping eventually to complete his Master of Divinity through Grace Bible Theological Seminary. John and his wife Bridgett live in Waterloo, and have five children. John loves the way music and liturgical elements in a Sunday service can be used both to tell the gospel story and to give expression to our desire for God’s active presence in the life of His Church. 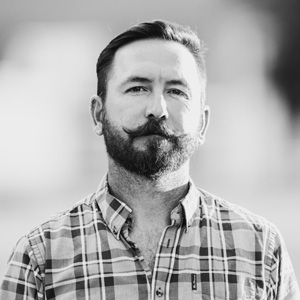 Eric was born and raised in Chatham, Ontario and was saved in his college years. He moved to Waterloo Region shortly after and married his wife, Meghan. Together they have four children. Eric and his family have faithfully attended and served at Trinity Bible Chapel for eleven years. Checkout his “Once For All Delivered” blog here.

ANTICHRIST AND HIS RUIN DOCUMENTARY

On the Friday night of this conference, we will be premiering our new feature length documentary titled “Antichrist and His Ruin“. Watch the trailer below and checkout antichristdocumentary.com for more information.

Aaron is the Founding & Lead Pastor at Harvest Windsor, where he has served since 2001. He has served as a college & seminary professor. He is married to Susie and dad to five children.

Pastor Aaron Rock will be leading a special elder training workshop at the conference. There will a luncheon for all the men that attend the workshop (and their wives).

HOTELS IN THE AREA

Tickets are SOLD OUT!

Signup via the button below to receive updates and information about the conference. We plan to record the sessions and post at a later date. We will keep everyone on the mailing list up-to-date.