Menno Simons (Anabaptist) and the Cross

Jesus Christ is the propitiation for our sins.  That means He fully satisfied God’s wrath towards our sins, and turned God’s wrath away from us.  I recently explained that the Gospel is a Gospel o 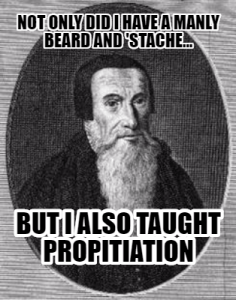 f propitiation, and to deny propitiation is to deny the Gospel.  That Christ propitiated God is very very very good news.  It is the evangelical message.

Menno Simons (1496-1561) was around at the time of the Reformation.  He was a leader of the Radical Reformation, a very early and influential Anabaptist, and the namesake of the Mennonites.  He did teach propitiation.

In an article called “The Lord’s Holy Supper,” Simons wrote,

Here it is proper to observe, how the Righteous died for the unrighteous, when we were yet sinners and enemies; how the spotless Lamb was prepared for us, in the fire of affliction, suffered upon the cross, and was offered an eternal propitiation for our sins; how the Creator of all things was bruised for our sakes, and he, who was above all the children of men, became the most unworthy, and was counted with evil doers; how the Innocent bore the sins of the whole world, blotted out all our transgressions, and redeemed us with his crimson blood, as the Scriptures declare, “I restored that which I took not away,” Ps. 69:4 (italics mine).

According to this early Anabaptist, Christ died for God’s enemies, Christ was prepared for us, Christ was was offered as the propitiation for our sins, and Christ was bruised for our sake.  Further to that, His sacrifice and blood blotted out our sins and redeemed us.  Simons spoke the language of propitiation and used the actual word, propitiation, to describe Christ’s atonement.  Not only that, but of those who deny this teaching, he said,

All those, then, who seek other remedies for their sins, however glorious and holy they may appear, than the only remedy provided by God, deny the Lord’s death, which he died for us, and his innocent blood which he shed for us; and they are those of whom the Lord complains and says, through his prophet Jeremiah, My people have committed two evils; they have forsaken me, the Fountain of living waters, and have hewn them out cisterns, that can hold no water, Jer. 2:13.

To Simons then, those who deny the Gospel of propitiation forsake God and have invented a false gospel, “that can hold no water.”  He saw any departure from this doctrine as a fanciful innovation and a denial of Christ.

So there we have it.  Menno Simons, early leader of the Anabaptists and namesake of the Mennonites, taught propitiation.  Propitiation, while held as Gospel truth by calvinisitic Protestants, was surely also held as Gospel truth by this Anabaptist.  And according to Simons, to deny propitiation is to erect “strange Baals to be worshipped instead of Christ.”  That’s as serious as it gets.

Note: I’ve rescheduled posting “John Wesley and the Cross” for a later date.