I hope I trigger you.  And I hope you trigger someone else. 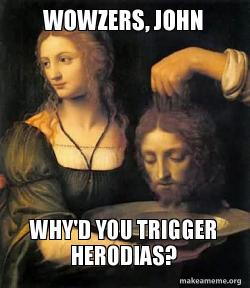 With three major universities nearby, our church is frequented by hundreds, if not thousands, of university students every year.  They’re some of the most devoted and passionate Christians I know.  I love them!

Universities are to be creative places where young minds explore, imagine, and debate ideas.

Some students claim they are told to avoid statements that trigger negative emotions among others.   Controversial statements are to be preempted with a “trigger warning.”  Students fear social ostracism if they don’t conform.  I’ve heard from several students who legitimately fear that their Christian clubs will be kicked off campus if they’re too forthright with the Gospel.  So some campus leaders encourage students to “sugar coat” the Gospel and to “gossip” it with covert language.  Whether or not those fears are substantiated, they do exist.  That they exist is telling.

This is not good.

I’m calling you to boldly challenge this soft-tyranny by shouting the Gospel from the roof tops, and to be risky for Jesus.

So here are eleven reasons I hope you get out there and trigger someone.

First, in Canada we are heirs of a heritage of freedom.  Freedom of religion, conscience, and speech are enshrined in our Charter of Rights and Freedoms.  This is a common grace that God has given to us, and our government recognizes it.  Countless men and women fought and died for these rights over the centuries.  These rights predate even the Magna Carta, written by Archbishop Stephen Langton and signed by King John in 1215 AD.  They didn’t come easy, but they can be lost easy.  Out of love for the next generation, we must assert our freedoms.  The alternative is that they will be lost.  We can expect chills on religious freedom in communist China or Soviet Russian, but this is Canada – the true north, strong and free.  Further if a university willfully suppresses freedom of speech, that school can be constitutionally challenged in court.

Third, there will be no trigger warnings on Judgment Day.  When Christ returns, he will tread your lost friends in the wine press of His wrath, and their blood will flow through the streets at a depth of several feet (Revelation 14:19-20). Instead of warning about triggers, we need to warn people of the wrath to come.

Fourth, the wisdom of God is foolishness.  We already know that.  But the Gospel is the power of God unto salvation.  First century people were offended by the message of the cross.  Instead of accommodating Corinthian sensibilities, Paul preached the message of the cross and made himself foolish (1 Corinthians 2:1-5).  Many Corinthians hated him for it, and they beat up some of his converts (Acts 18:1-17).  The Gospel is the power of God, and to rely on something else it is to deny that power.  Paul was dragged out of many cities.  So if you’re dragged off campus for your bold witness, then good on you.

Fifth, preaching the Gospel means we get both good and bad reactions.  For some it will be an aroma of life unto life.  Those people will embrace it and be saved.  For many others it will be an aroma of death unto death (2 Corinthians 2:16).  Those people will get angry and hateful.  Preaching the Gospel means we are open to both reactions.  It’s the way it has always been. So get out there and create a stir.  And when they hate you, praise the Lord (Luke 6:22).

Seventh, Christians are characterized by boldness.  And cowards go to hell.  The apostles preached the Gospel with boldness (Acts 4:13; 4:31; 9:28; 13:46; 18:26; 26:26; etc).  If we deny Christ in front of others, He promises to deny us in front of His Father (Matthew 10:33).  When given the option of either speaking with timidity or boldness, I know what side I want to err on.  The cowardly will burn in the lake of fire (Revelation 21:8).  Being kicked out of the Eternal City is much worse than being kicked off campus

Ninth, we need to call people to a higher standard.  A people who cannot handle open and robust dialogue need to learn some life skills.  My grandfather lied about his age at 16 so he could join the air force during WWII.  My great-grandfather was poisoned by mustard gas as a young man during WWI.  He came back with shell-shock.  There were no trigger warnings in the trenches.  Coddling people in their inability to deal with facts is hateful because it’s affirming and encouraging their inability to cope with reality.  Loving them entails calling them to maturity.

Tenth, the Church has been built by people who excelled at triggering people.  Of all the apostles, only John was not martyred, but he did survive being boiled alive in oil.  Paul was beheaded.  Peter was crucified upside down.  James had his brains bashed out with a fuller’s club at the age of 94.  They were killed because they offended people.  And God built the Church on their lives.

Eleventh, our Lord Jesus triggered Jews and Romans, and they crucified Him for it.  We should follow His example.

So there you have it, eleven reasons why I think Christians should boldly risk it all proclaiming the Gospel.  Let goods and kindred go, this mortal life also.  Call people to the narrow gate.  There’s not much time left.

Get out there and trigger someone in the Name of Jesus.