I have been advising parents to pull their children from public schools for several years.  The primary objective of education should be to foster Christian virtue in the hearts of children.  Apparently this view was once shared by the majority of Ontarians to the point that they had it enshrined in law.  Section 264.1.c of the Ontario Education Act lists that one of the duties of a public school teacher is

…to inculcate by precept and example respect for religion and the principles of Judaeo-Christian morality and the highest regard for truth, justice, loyalty, love of country, humanity, benevolence, sobriety, industry, frugality, purity, temperance and all other virtues.1

No wonder Ontario’s parents – especially the Christian parents – were once comfortable with a state education.  While the law still stands, it is no longer enforced.  Parents have a sacred duty to educate their children, and public school should no longer be an option, at least in Waterloo Region.

When I say that, I often receive the very common “missionary objection.”  It goes something like, “My little lamb will be salt and light – a real life missionary – in the public system.”  Within that lay many latent assumptions, not the least of which is that said little lamb is soundly born-again and endowed with the manifest presence of the Holy Spirit.  Fanciful assumptions notwithstanding, I am wondering if there are any limits to this parental missionary zeal.  Is there somewhere you wouldn’t send your child alone to be a missionary, even if the venue claimed to offer free education? 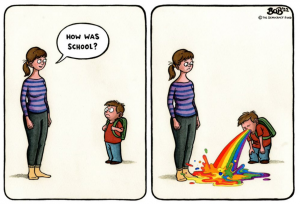 More to the point: would you send your children to a gay bar that offers math lessons and free childcare?  The math lessons will be taught by creatures who shamelessly promote things like masturbation and “anal sex” (i.e., sodomy) to your children, and the lessons themselves were pre-fabricated by a real life pedophile (like this).  With that, the administrators of the gay bar will reward the instructors who teach your sons to kiss boys and your daughters to kiss girls (see this), and they will promote material that encourages “gender experimentation” while punishing teachers who question whether little children should be encouraged towards hormone blockers and “gender reassignment surgery” (like this).  They will dress grown men up with make-up and wigs to resemble cheap hookers, parading them in front of your children, signaling that real manhood can be womanhood and real womanhood is objectifying oneself as someone’s plaything (like this).  But, you won’t have to worry about the cost—it’s all free! – and they promise to educate your children in math.  Of course biology lessons are compromised because the instructor might be a tranny, but the children will get math.  To top it off, they will teach your children not to say bad words like “tranny,” which really is an unvirtuous thing to say, and the instructors at the gay bar — experts in virtue that they are — will even teach that “tranny” is an unvirtuous slur.  Your children can be educated for free at the gay bar, while you can boast to your Christian friends that this is a real missionary venture, just like the Apostle Paul’s trip to Athens.  Only this is free.

That gay bar, as described, sounds like the Waterloo Region District School Board, by the way.  Just click on the links in the previous paragraph and see for yourself.  A major difference, of course, is that that WRDSB calls itself a “school board” and the gay bar calls itself a “gay bar.”  But remember, WRDSB calls men “women” and women “men.”  If men can be “women,” can’t a gay bar be called a “school board”?  What else do you call an institution where adults groom children to be sexual deviants?  “Hell,” perhaps.

Now, “That’s harsh,” you might say.  As Jesus said, you can recognize a tree by its fruit (Matthew 7:16), and WRDSB is producing fruity fruit.  They recently released a student census that, among other things, boasts of student sexual orientation.  Yes, that’s right, they spent time asking little children about their sexual desires.  That alarming tidbit aside, a WRDSB email summarizing the census reported “More than 4% of student participants in Grades 4 to 12 self-identified with a 2SLGBTQIA+ gender,” and, “Nearly 24% of student participants in Grades 7 to 12 self-identified with at least one 2SLGBTQIA+ sexual orientation.”  The fruit production is indeed plentiful.  The census is available here, and here are two of its charts: 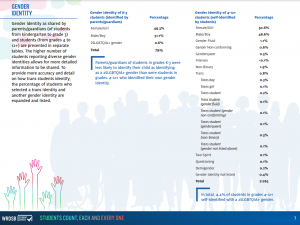 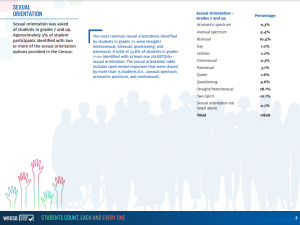 “Blessed is the man who walks not in the counsel of the wicked, nor stands in the way of sinners, nor sits in the seat of scoffers” (Psalm 1:1).

“…whoever causes one of these little ones who believe in me to sin, it would be better for him to have a great millstone fastened around his neck and to be drowned in the depth of the sea” (Matthew 18:6).

What are the limits on your child’s missionary activity?  Where won’t you send your child, unattended by responsible adults, in missionary zeal?  Would you send him to a gay bar that teaches math lessons and offers free child care?  What about a gay bar that poses as a public school?