Protect Your Children from Public School

A few months ago, I reported (here) of a Waterloo Region public school teacher who the WRDSB chair censored at a board meeting.  Her offence?  She questioned whether school officials should be teaching children that hormone blockers are a good idea.  She did so while quoting a public school library book that presented hormone blockers as positive and normal.  They censored her presentation and slandered her to the media (see video here).  It’s unacceptable, at least to the WRDSB, to question whether perfectly healthy children should mutilate their bodies.

But, do you know what is acceptable at the WRDSB?  Drag queens!  That’s right.  Grown men who dress like cheap hookers are now all the rage.  Here’s a tweet from a Ms. Carli Parsons, whose Twitter profile indicates she is vice principal in a Waterloo Region public school.  She praises a local public school for hosting a ghoulish looking fellow who goes by the name of “Kyne.”  WRDSB smiled approvingly with a retweet. 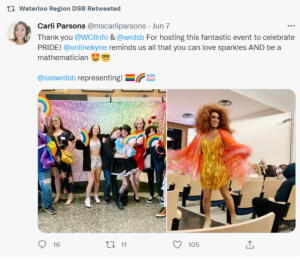 The WRDSB also praised “Kyne” who helped a GSA (gay-straight alliance) event and has passion for mathematics: 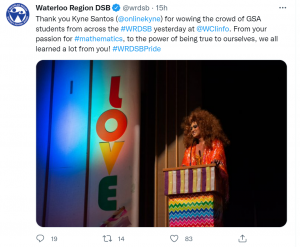 Talk about a great role model for your sons!  Not only does his wig and make-up outweigh his petite frame, but he likes math.  He can’t discern what a woman is, but he will help you with calculus and maybe even biology too.

Beyond that, WRDSB also rewarded a certain Ms. Jenny Brooks with a retweet.  Her Twitter profile says she’s a grade 5/6 teacher.  Her noble achievement is teaching her young students about “gender fluidity,” queer theory on pronouns, being “pansexual,” and that “the world has bigger problems than boys who kiss boys and girls who kiss girls.” 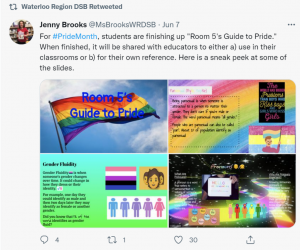 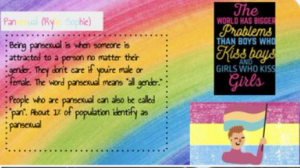 Even more alarming, a 1985 report which surveyed 19 separate studies and is kept on the US Department of Justice website lists some more problems:

Given that study on the US Department of Justice website, we should not be surprised to learn that the sex-ed curriculum used in WRDSB and other Ontario schools was originally designed under the direction of Premier Kathleen Wynne’s Deputy Education Minister, Benjamin Levin, who is a convicted child pornographer.8

In WRDSB it is wrong to question whether children should use hormone blockers.  In WRDSB it is good to bring in drag queens and normalize sodomy. 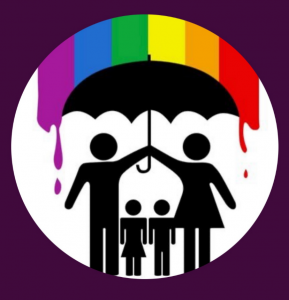 This is all one step away from pedophilia.  Here’s how the logic will work.  If gender is a social construct, why isn’t age?  And, if children can let adults carve up their private parts, why can’t they let adults touch their private parts?  As if this septic tank wasn’t overflowing with enough raw sewage, that’s where this leads.  Also, people tend to be better behaved in public than in private.  If this is what they advertise on social media, what are they doing when parents aren’t looking?

What will it take to get your children out of this swamp?  It’s gone.  God has left this system.  It’s been handed over.   Sure, it’s free childcare, but at what cost?

“…whoever causes one of these little ones who believe in me to sin, it would be better for him to have a great millstone fastened around his neck and to be drowned in the depth of the sea” (Matthew 18:6).