CBC and The High Water Mark of Moral Decadence: Where Does It End?

Canada’s state broadcaster, CBC, released a disgraceful video a few days ago.  In it a media personality, surrounded by a group of very young children, celebrates gay pride.  She venerates gay “heroes” to the kids, prompts the kids to jubilation over gay pride, cues them to extol so-called gay marriage, and overtly suggests that it’s a virtuous thing to question one’s sexuality because she did so after seeing a nude actress in a film while a child.  Did I mention this is all with a bunch of children who look to be about kindergarten age?

“…whoever causes one of these little ones who believe in me to sin, it would be better for him to have a great millstone fastened around his neck and to be drowned in the depth of the sea” (Matthew 18:6)

A few years ago when so-called gay marriage was legalized, most Canadians naively assumed that that was where it would stop.  It was all part of “progress.”  Then we got Kathleen Wynn’s sex education curriculum.  Then we got the normalization of trannies.  Then speech laws.  And now this:

Late last week, before I saw that video, I published a blog that spoke about sodomy in very strong terms.  I received some criticism.  Did you watch that CBC video?   I’m glad I wrote that blog last week.  Things have spiraled way beyond where most thought this would go, and someone needs to pull the e-break.  This is yet another sign that God has handed over this nation in judgment.  When is enough enough?  Unless the Lord returns, something will give.  Something must give.  From my perspective, I see at least four options outside of Christ’s return:

First, it will keep going until there are absolutely no sexual restraints and nothing is off limits except criticizing what’s not off limits.  I don’t foresee this being the case.  God typically confounds the wisdom of the world and turns their folly back on their heads.  He will not be mocked (Galatians 6:7).  And judging by the comments on the youtube post, as well as the conversations I have with normal Canadians (whether Christian or not), I suspect a lot of people are about sick of all this.

Second, because I don’t foresee option one happening, I wonder if God might turn this nation into a massive smoldering crater.  That could happen, and it has happened before in, for example, Sodom and Gomorrah among other places.  So this seems more likely than the previous option.  That being said, I don’t foresee this just yet.  God continues to raise up life-giving churches in this nation.  God continues to call men to preach the Gospel clearly.  I can point to dozens of churches in cities all over Canada where Christ is exalted, families flourish, and sinners are saved.  That God is raising up a remnant tells me He is not finished with Canada just yet. 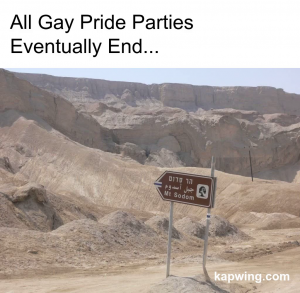 Third, because He is not finished with the nation in its entirety, I wonder if He’s only finished with a certain part of it.  What I mean is that he might be done with our systems of government or at least with the people who are telling us what to think and the ones who are thinking what they’re told to think; He might be about to sweep away the likes of those who produced that video at the CBC.  It could be that in one way or another He is about to completely destroy the present system of things and allow something even better to rise in its place.  Will we end up with fifteen different nations on the northern half of North America?  Will one or even a few of those nations emerge as thriving Christian cultures?  Will a few others of those nations be run by ayatollahs or become Islamic caliphates who punish the ruling elites on behalf of God?  Who knows?  I do know that God has creative ways of rescuing His people whose souls are in torment while destroying the people who torment their souls (2 Peter 2:6-10; Genesis 6-8).

Each of those four options stem from my own sanctified conjecture as an amateur student of human history, and there might be even more options too.  Yes, likely the Lord has planned something none of us have thought of.  But I do know some things for sure: God commands men everywhere to repent.  He demands it.  He is Lord of all, and He is calling this entire nation to submit to His lordship in repentance, to escape the fury of His wrath.  He offers mercy and grace in Jesus Christ.  Christ died for the ungodly, and He will forgive all who turn to Him with faith and repentance.  That is not conjecture.  That is Gospel truth.  So flee from the wrath to come.  Believe in the Lord Jesus Christ, be saved.