King Alfred the Great is the only English king ever to receive the title, “Great.” He lived and reigned during the second half of the 9th century, and he rose to greatness in what is likely the darkest hour of English history. His royal family had fallen to a palace coup, the British Isles were under constant Viking siege, and his own people turned on him early in his reign. Amidst the hardship, King Alfred rose to become an English king whose vision for his island nation still bears fruit among the world’s most prosperous and free nations even today. Below, I offer some reasons why he’s considered “Great.” 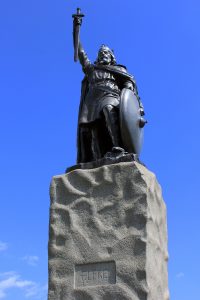 FROM POWER HE FELL, AND FROM POVERTY HE ROSE

Decimated and exhausted by Viking invasions, his own people lost confidence in him very early to chose Viking overlords in his stead. Alfred, with a small band of loyalists, was exiled to a small inland island in the very far west of Essex. From isolation, he plotted and launched a successful liberation of the Anglo-Saxons by defeating the Viking warlord, Guthrum. Guthrum allegedly then converted to Christianity, and Alfred spared his life to send him to Northumbria where he lived among the Viking settlements of the Danelaw. Now with the loyalty of his own people, Alfred liberated and fortified the entire south of England to secure it against Viking invasion. Once a rejected king isolated on an inland island, Alfred rose to unite the Anglo-Saxons.

HE TRANSLATED PARTS OF THE BIBLE INTO ENGLISH

Roughly half a millennium before John Wycliffe and William Tyndale, King Alfred translated parts of the Bible into English. Finding strength during his times of exile by reading the Psalms, he wanted to make the Book of Psalms available to all Anglo-Saxons. So he did. Along with that, he translated parts of Moses’ Law and the Gospels, with some of the works of St. Augustine, St. Jerome, and St. Gregory. He desired to lift the people out of ignorance into a true knowledge of God. By providing light through Christian literature in their own language, he believed he’d lead his kingdom towards peace and righteousness.

HE PROLIFERATED THE COMMON LAW

Up until this point, much of the legal code had been written in the foreign Latin language. So the Anglo-Saxons had no ability to know the nation’s law and whether those laws were being applied with justice and equity. Having translated the Law of Moses and the Golden Rule into English, he created what he deemed to be an equitable and just society. Once written, he sent copies of his legal code throughout the kingdom so all literate people could know it and apply it properly. No longer was the law of the land privy to an elitist group of Latin speakers, but rather it became the common law for all men. Noteworthy is that under this Christian common law, Alfred provided legal protection for slaves who had, until Alfred’s time, “been sold, beaten or even killed” at their master’s whim.1

With the translation of religious literature and the proliferation of the common law in the language of the people, Alfred undertook an aggressive education policy. He believed that the Viking invasions had been God’s judgment on the Anglo-Saxons, so as an act of repentance he resolved to teach the people of his realm to live and think like Christians. He appointed scholars and created schools across the land because he envisioned a literate and thus liberated people who understood Christianity as well as the laws of the nation. After his death, the vision absorbed the other ethnicities of England, including the descendants of the Viking invaders in the Danelaw, to unite the entire nation. Through a Christian education, he successfully united a diverse people who, in earlier times, had been warring enemies.

HE CREATED A DECENTRALIZED NATION-STATE

Alfred ordered and supported the effort of each city within his realm to fortify and maintain its own walls, as well as to arm its own citizen militia. In theory each city, motivated by love of family and kin, would defend itself against Viking attempts to rape and pillage. It worked wonderfully. While continental Europe continued to suffer from Viking lootings, the south of England eventually deterred the invasions and maintained their own sovereignty. The cities that were slow to carry out his vision learned hard lessons at the hands of Vikings, and their bad example motivated other cities to fortify and arm themselves. That was all by Alfred acknowledging the responsibility of the smallest unit to care for itself, as opposed to creating a sense of dependency on a centralized state.

HE ANSWERED TO A REPRESENTATIVE GOVERNMENT

Far from being a Rex Lex dictator, King Alfred answered to the Witan. Finding its roots in the forests of ancient Saxony, the Witan served as an early seed of Westminster parliamentary democracy. The leaders of the Witan, among other powers, could depose and appoint kings. They deposed Alfred early in his reign in favour of a Viking warlord, so Alfred learned to respect their rule when he eventually liberated them from Vikings to regain the Witan’s favour and his own power.

HIS VISION SPANS THE GLOBE AND TRANSCENDS ETHNICITIES

When the English speaking people arrived in Australia, New Zealand, and North America, many believed they were carrying out Alfred’s vision for a free world governed by a Christian conscience. All English speaking nations can trace to their legal system and parliamentary democracy to Alfred’s common law and the Witan to whom he answered. His vision for a free market “held the seeds” of the industrial revolution. Even the early Americans called the first flagship of their first navy “Alfred” in his honour. But the vision is not limited to English speakers. Often as a child, my father pointed to the wealth of British Hong Kong, in contrast to mainland communist China, as an example of how a free society, no matter the language or ethnicity, with a decentralized government leads to human flourishing. That free society was envisioned by Alfred, who’s now called “Great.”

HE WAS A BAPTIST

Okay, this point is meant to be slightly humorous. But seriously, when the Viking warlord Guthrum converted, Alfred had him baptized in the church at Aller, and “Guthrum and his men may have been completely immersed in water as was still often the case at this time.”2 So the first English king and the only one called “Great” likely baptized people the right way, and I guess that makes him a Baptist! Ha!

King Alfred is the only English King to have ever been called “Great.” He rose from exile and isolation to overthrow Viking slave masters, fortify his nation, unite his people, provide an early example of an accessible Christian education, and have his vision for society taken to the ends of the earth. That’s likely why they called him “Great.” My sense is that Alfred the Great offers many lessons for our own generation, not the least of which is what he learned by descending from prosperity to poverty and then ascending back to prosperity. In Alfred’s own words,

In the midst of prosperity the mind is elated, and in prosperity a man forgets himself; in hardship he is forced to reflect on himself, even though he be unwilling. In prosperity a man often destroys the good he has done; amidst the difficulties he often repairs what he long since did in the way of wickedness.3

Churchill, Winston. A History of the English-Speaking Peoples, Vol. 1 The Birth of Britain. Bloomsbury: New York, 2015.

Pollard, Justin. Alfred the Great: The Man Who Made England. John Murray: London, 2005.