Jerusalem and Edmonton: Give Us Barabbas! No King But Caesar!

I will shape this little essay by acquainting the reader with a few characters present on scene at the trial of our Lord in Jerusalem.  Then, after those introductions, I will introduce you to some characters on our contemporary scene in Edmonton.  I suspect that when all the introductions are made we might draw some parallels between the characters of the two scenes.  I will offer no concluding remarks, as I trust the reader apt enough to draw his/her own conclusions.

First and foremost is our Lord Jesus Christ.  He was a righteous and peaceful man who stood trial before a human court.  His prosecutors could find no charge against Him, except that He claimed to be the Messianic King of Psalm 2, especially that had supremacy over God’s temple.  He had the courage to apply that teaching, cleanse the temple, and offer His Gospel of hope to a nation in despair.  In the eyes of the Romans and his fellow countrymen, that meant that He “opposes Caesar” (John 19:12).  For that, he was sentenced to death.

Then we have Pontius Pilate.  He was a wet-noodle politician who presided as judge over the trial of Christ.  He faced an angry mob that demanded Christ’s death, but he himself knew there was “no guilt in him” (John 18:38).  He wanted to release Jesus, but the mob got the better of his spineless frame. So he washed his hands of the situation and handed Jesus over to be crucified.

Next in our list is Barabbas.  Incarcerated as a convicted robber, murderer, and insurrectionist, Barabbas was notorious.  Pontius Pilate, afflicted in his conscience and desiring to release Jesus from prison, offered to release a prisoner.  Instead of Jesus, the crowd asked that Pilate release Barabbas.  They could have released the righteous and peaceful Son of God upon the people to bring healing and love, but instead they desired Barabbas — an imminent threat to peace and a danger to their families.  Pontius Pilate, ever the invertebrate, cowed to their wishes.

We now move to the Jewish leaders.  Among their many areas of expertise was their knack to nitpick over cleanliness codes.  Shortly after Christ miraculously fed the five thousand (Matthew 14:13-21), they went after Jesus for not forcing His disciples to wash their hands before eating (Matthew 15:1-2).  Jesus said, “They tie up heavy burdens, hard to bear, and lay them on people’s shoulders, but they themselves are not willing to move them with their finger” (Matthew 23:4).  They were “blind guides, straining a gnat and swallowing a camel” (Matthew 23:24). They concocted the plan to kill Christ, and they stood as Christ’s most vicious accusers at His trial.

Finally, we have the angry mob, made up of some very religious people.  They were outraged over Christ, and they chose Barabbas.  They accused Jesus of treason against Caesar’s rule (John 19:12).  They demanded Christ be crucified.  They rejected Christ’s kingship.  And they declared that they have “no king but Caesar” (John 19:15).

Moving on to our contemporary scene, I will now introduce you to a few more characters.  I will make no specific concluding remarks, thus allowing the reader to draw his/her own conclusions.

First and foremost is an Alberta pastor.  He was a righteous and peaceful man who stood trial before a human court.  His prosecutors could find no charge against him, except that he claimed that Christ is the Messianic King of Psalm 2, especially that Christ is Head of the Church.  He had the courage to apply that teaching, invite his community to worship Christ, and offer the Gospel of hope to a city in despair.  In the eyes of public health departments, that meant that He “opposes Caesar.”  For that, he was thrown into jail.

Then we have the leaders of Alberta.  They are wet-noodle types who preside over their province where the pastor is in jail.  They faced an angry mob that demanded the pastor’s imprisonment, and they didn’t even attempt to defend the pastor.   Because of their spineless frames, they washed their hands of the situation, publicly condemned the pastor for his violation of Alberta’s cleanliness codes, and they passed the buck to the public health workers.  The pastor remains in jail, and the leaders try not to talk about it. 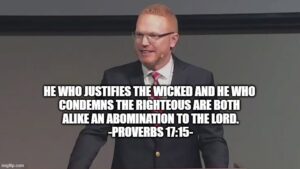 Next on our list are two convicted criminals.  Both have recently been released from jail.  One has a history of breaking into homes to sexually assault women and minors while they sleep.  The other is a serial pedophile who molested a 6 year old in 2008 and has reoffended multiple times.  The leaders who preside over Alberta do not seem to be afflicted in their consciences over the release of violent sex offenders while a pastor is in jail.  The crowd was outraged when the pastor opened his church, but they’ve accepted the release of sexual predators as a normal part of life in Edmonton.   They could have the righteous and peaceful pastor who brings the Gospel and love to the people, but they have two sex offenders who are imminent threats to peace and a danger to their families.  The leaders, ever the invertebrates, remained troubled that the pastor opened his church.

We now move to the public health department.  Among their many areas of expertise is their knack at nitpicking over cleanliness codes.  Shortly after the pastor brought hope to his community—a community they themselves have subjected to despair—they went after the pastor because he did not uphold their cleanliness codes in his great act of compassion when he opened his church.  Having forced many of the people out of work, the public health departments have never missed a pay cheque, all the while claiming “We’re all in this together.”  They tie up heavy burdens, hard to bear, and lay them on people’s shoulders, but they themselves are not willing to move them with their finger.  They are blind guides, straining a gnat and swallowing a camel. They concocted the plan to arrest the pastor, and they will likely stand as his most vicious accusers at his trial.

Finally, we have the sanctimonious church leaders and their followers.  Some were outraged over the pastor’s decision to open his church, some pastors castigated their own parishioners for supporting the arrested pastor, and some dispassionately dismissed the arrested pastor’s actions as “unwise” or “a bad testimony.”  Their disapproval of the arrested pastor was much louder than their disapproval of the rapist and the pedophile who the government released in their communities.  They accused the pastor of breaking the government’s health rules, while really the pastor was trying to uphold the rule of Christ.  Condemning the imprisoned pastor and embracing the rule of public health while forsaking the worship of Christ, many of the church leaders have seemingly declared by their deeds that they have “no king but Caesar” (John 19:15).