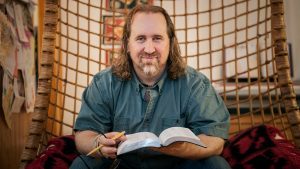 I’ve made some very strong statements about Bruxy Cavey.  He might be Canada’s most recognizable church leader, and he pastors one of Canada’s largest churches.  He is in the middle of what I believe is the most significant theological controversy Canadian Evangelicals have faced in 70 years—probably the most significant theological controversy since the modernist/fundamentalist controversy.  Maybe I’ll explain why I think this is so significant in another blog, but right here in this blog I’m going to explain why I’m convinced he’s a false teacher.  Some might think I’ve been a little too hasty in saying these strong words.  I’m not surprised.  We shouldn’t throw those labels around quickly, and, let’s face it, Canadians just aren’t accustomed to using this type of biblical language.  That being said, I submit the following to explain why I’ve chosen to use such strong biblical language about this popular Canadian pastor.

Earlier today, Wyatt Graham released a blog called “How to Spot a False Teacher.”  That was a follow-up from his blog a day earlier which dealt with the strong words Christians can use to call out false teachers.  Today’s blog, in my opinion, was exceptional.  He defines a false teacher as one who “confesses false doctrine and harms others yet knows how to hide him or herself well.” Excellent.  He then explains that his definition contains four elements: “(1) a position of teaching in which the teacher instructs others, (2) a wrong confession of doctrine, (3) a life that harms others, and (4) an ability to disguise oneself.”  Perfect.

In what follows, I outline how I have come to the strong conviction that Bruxy Cavey is a false teacher, and why I believe that label is justified, given Wyatt’s very apt definition.  But I’m not going to be comprehensive in discussing Cavey’s teachings.  I’m going to be specific.  I’m going to zero in on what he’s said about the atonement of Jesus Christ.  For now, in this blog at least, I will not discuss the fact that he’s called the authority of Scripture “made up,” has asserted the errancy of Scripture, has an unbiblical position on homosexuality, has opened his pulpit to known heretics without refuting their teachings, and has made some questionable statements about the immutability of God and Christ’s incarnation.  No, I won’t discuss that here.  Instead, I’m focusing on his view of the atonement.

CAVEY’S FIRST AND SECOND DENIALS OF THE GOSPEL(2012)

In a podcast for his church issued in 2012, Bruxy Cavey said,

Shortly after that, also in 2012, he dropped another podcast and said,

Let’s not rally around a theory that is Scripturally nebulous that the church didn’t even hold onto until the Protestant Reformation in any way. That was a completely novel way of thinking. Lets not make that our hill to die on. Which, for many people it is assumed that penal substitutionary atonement just simply is the Gospel. We need to challenge that, and say no, that turns faith into a work, it says once you have this particular doctrine figured out, then you can be saved by it. I’d say this goes way beyond scripture. And at some point becomes contradictory to it (Why Did Jesus Die? #2: Drive Home Podcast [4:27]).

CAVEY’S THIRD DENIAL OF THE GOSPEL (circa 2012)

These next quotes aren’t as easy to date because they were removed from the Internet after I spoke about them publicly in a podcast.  Fortunately, Eric Schneider has saved this material on a hard drive, so he was able to quickly upload these videos to his own YouTube account after they were taken from the Internet.  We haven’t lost the material, but for the date I must rely on my memory which tells me they were said sometime around 2012.  It is important to note that these quotes were not to his church, but rather to a group of seminary students at Fresno Pacific University.  So this is the second setting in which he overtly denies the Gospel.  He says,

He goes on to say he’d like to convert people from the Gospel and he admonishes his students to not preach it:

I’d love to convert everyone away from penal substitutionary atonement as a theory of atonement, but if I didn’t that’s fine. But what I can say is just don’t preach it (Bruxy Cavey Teaching on Gospel Proclamation in the Book of Acts [10:08]).

Clarifying himself a little later, he says,

Thus we now have Bruxy Cavey overtly denying the Gospel and encouraging people to challenge the Gospel in two different setting from three different sources.

Having reviewed this and other material by Bruxy Cavey, I became very concerned.  In March, 2017, I published a blog “Bruxy Cavey and The Cross.”  In that blog, I referenced Cavey’s quotes and persuasively argued from Scripture and church history that his statements, at face value, are an overt denial of the Gospel.  In that blog, I did not explicitly accuse Cavey of being a false teacher, but I did ask the question and let the reader draw his own conclusions from all the evidence.  Some would say I overtly implied that he was a false teacher.  If at this point I had overtly implied that Cavey is a false teacher, he had already overtly stated that he doesn’t believe Christ propitiated God, he’d overtly told his church to challenge the belief that Christ propitiated God, he’d overtly boasted to his seminary students that he’d like to convert people away from the belief that Christ propitiated God, and he’d overtly charged his seminary students not to preach that Christ propitiated God.  In other words, I might have overtly insinuated that he’s a false teacher.  But he’d already overty said he denies the Gospel and would like to convert people away from the Gospel.

My challenge to Cavey gained a lot of traction.  So much was the traction that in April 2017, he issued what looked like a reply without mentioning my blog specifically.  By this point, I know for a fact that his leaders had read some of my material about him due to letters I have seen written by them.  In the blog he presented penal substitutionary atonement (PSA) as a mere theory about the Gospel that Christians can deny if they like.  The most important thing, according to Cavey, is that Christians just pick a theory, any theory.  As for himself, he noted, “So let me end on a personal note. It’s true, I’m not a fan of PSA, and even less of a fan of people preaching PSA like it is the gospel.”  So one month after I offered a stinging critique of his teaching on the Gospel, he dug in.  He dug in in a fancy way, with a convoluted essay that was confusing to read.  But he dug in.

In April, 2017, Bruxy Cavey visited Woodland Hills Church in St. Paul, Minnesota.  That church is pastored by popular American open-theist Greg Boyd.  Cavey preached a sermon, and then with Greg Boyd and Dennis Edwards held a question and answer period.  Eric Schneider has written an excellent review of that event here.  For the sake of this blog, the most important thing said at that event was what Bruxy Cavey said about the blood of Christ.  You can watch the three minute clip here.  It might be the most contemptible thing I’ve ever heard a pastor say.  Essentially, Cavey said that the blood of Christ procured absolutely nothing.  According to him, Christ essentially died to give us peace of mind.  Here’s the quote:

Blood is central to the religious sacrificial system of all ancient religions. I don’t think that’s a matter of God making it central I think that’s a matter of us making it central and that Jesus enters into a religious system to speak their language and say ‘eyes front, look here, you’re forgiven. You do not need to spill another drop of blood. Look at the blood of Christ that is shed for you.’ And Christ sheds His blood as the ultimate declaration of complete forgiveness and freedom from your religious system as the last sacrifice. I do not think that that is rooted in the fact that God would like to forgive but somehow the omnipotent creator of the universe has to create a physical being and kill it, and shed a certain amount of it’s physical blood so that something’s released cosmically. That suggests that there is a law above God that He is submitted to. (Greg Boyd blurts out “I gotta get my blood!”) Yeah ‘there’s something I’d like to do but I live in a universe that has a blood economy that says I can only forgive if I make the right sacrifice’ to what? To what? To the bloodthirsty God above God? There’s nothing above God! And so God Himself can forgive, but He enters into our need to see blood to be assured ‘is this forgiveness real? Are you sure I can stop killing animals to obtain your forgiveness?’ and He says ‘I will give you a visual illustration of that absolute reality – here it is, the last sacrifice. You are free.’ 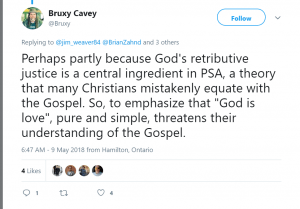 Here he not only denies that PSA is central to the Gospel, but he slanderously says that those of us who hold to the Gospel are threatened by the love of God.

Earlier today, Wyatt Graham released a blog called “How to Spot a False Teacher.”  That was a follow-up from his blog a day earlier which dealt with the strong words Christians can use when calling out false teachers.  Wyatt’s blog today, in my opinion, was exceptional.  He defines a false teacher as one who “confesses false doctrine and harms others yet knows how to hide him or herself well.” He then explains that his definition contains four elements: “(1) a position of teaching in which the teacher instructs others, (2) a wrong confession of doctrine, (3) a life that harms others, and (4) an ability to disguise oneself.”

Let’s evaluate Bruxy Cavey on the basis of Wyatt’s four points given what I’ve presented already:

(1) A position of teaching in which the teacher instructs others

Cavey pastors one of Canada’s largest churches, teaches at conferences and seminaries, writes books, and claims to speak on behalf of conservative Christians.

(2) A wrong confession of doctrine

I believe I have shown beyond a reasonable doubt that Cavey has consciously denied the Gospel.  And, remember, in this blog I have not discussed that he’s called the authority of Scripture “made up,” has asserted the errancy of Scripture, has an unbiblical position on homosexuality, has opened his pulpit to known heretics without refuting their teachings, and has made some questionable statements about the immutability of God and Christ’s incarnation.  All of that is outside of what I have discussed above, but adds even more weight to what I believe is an air-tight argument that Bruxy Cavey is a false teacher.

(3) A life that harms others

He’s denied the Gospel and taught people to do the same.  Leading people to hell is harmful.

(4) Has an ability to disguise oneself

Canadian Christians have assumed that he’s one of us for a long time.  They’ve had him at conferences, read his books, and he’s taught at seminaries.  The first quotes I offered above are from 2012.  It’s 2018.  People still think he shouldn’t be called a false teacher.  That’s a good disguise.

With all of that said, can anyone out there tell me why I shouldn’t call Bruxy Cavey a false teacher?  Having asked that, I think I will ask one more question which might even be more important.  Given what I’ve presented, why wouldn’t you call him a false teacher?

Born and raised in Guelph, Jacob holds a Master of Divinity from The Southern Baptist Theological Seminary in Louisville, Kentucky. He became pastor of Trinity Bible Chapel in August, 2009. Jacob is married to his high school sweetheart, Joanna, and together they have five children.

The First Eight Years: A Celebration of Answered Prayer