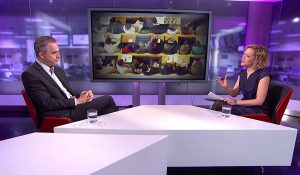 Over a year ago, Jordan Peterson released a series of Youtube videos that challenged the University of Toronto’s attempt to enforce the use of preferred gender pronouns.  Himself being a professor at the university, he wondered originally if the challenge would cost him his job.  It didn’t.  Instead, it earned him fame and a following.  Joe Rogan interviewed him a few months later, he testified at a Canadian senate hearing on Bill C-16 (also known as the transgender rights bill), and then in mid-January of this year Cathy Newman of Britain’s Chanel 4 News interviewed him in what became another viral video.  Peterson is now likely a household name the Anglosphere over.

Having watched many of his online videos, I like Jordan Peterson.  I like him a lot.  I appreciate his willingness to speak plainly.  I admire his courage.  I esteem his intellect.  I believe he’s doing untold good for our nation and culture.

This past summer I went to hear him lecture on the Book of Genesis at the University of Toronto.  Three things prompted me to drive into Chiraana (as true Torontonians call it) from my more quiet place outside the GTA.  First, a friend whose company I enjoy invited me and offered to pay for me.  Second, Peterson intrigues me for reasons already stated.  Third, I spent almost three years preaching through Genesis and have attempted (albeit no doubt unsuccessfully) to overturn every little stone in the Bible’s first book, so I wanted to compare my notes with Peterson’s.

Peterson is an outspoken critic of the worst aspects of post-modernism.  He places a high premium on meaning.  He desires to truly understand people and their thoughts.  That’s why his talk on Genesis mostly disappointed me: he imposed meaning on it and thus missed its meaning.

I’ll explain my disappointment more in a moment, but first I do need to say it wasn’t all disappointing.  It was just mostly disappointing.  I was astounded that he could attract such a large group of young millennial men to listen to him lecture on the Bible.  He upheld the Bible as useful.  He demonstrated a sincere intrigue with the Scriptures, an intrigue that seems absent among many secular academics.  That did not disappoint.

What did disappoint were the insights he did attain, the ones he didn’t attain, and the interpretive methods he used in his attaining.  Peterson started his lecture by presenting the documentary hypothesis as fact.  The documentary hypothesis is the belief that the books of Moses are an editorial compilation of several different sources.  As a theory it originated about 250 years ago, and it was developed within the theologically liberal school of thought.  Essentially, along with having been a battering ram against the Bible’s divine origin and authority for generations, it’s also been a distraction from applying the true meaning of Scripture.

With the assumption of the documentary hypothesis, Peterson also took an evolutionary perspective of the Scriptures.  I admit that I still don’t completely understand this view, but he claimed that the stories of the Bible evolved over hundreds of years, maybe thousands, to produce a document that is meaningful to humanity.  With this the Bible is akin to, although probably even more valuable than, something like Aesop’s Fables.  It is essentially the compilation of some very useful lessons on how to have a good life and build a good society.

With the documentary hypothesis and editorial evolution as the origin of the biblical text, Peterson applied a Jungian hermeneutic to interpret Genesis.  What I mean is that he interpreted the text through the lens of the late Carl Jung.  To him every story had an archetypal meaning that is helpful even today.  He did not employ the interpretive methods of the Ancient Hebrews to whom the book was originally written.  Instead, he employed the interpretive presuppositions of an early 20th century Swiss psychiatrist.  That’s a big leap in time and culture.

To understand Genesis, a 3,500 year old document, Peterson viewed the book through lenses that are 90 years old (Jung’s) which are founded on presuppositions that are 250 years old (theological liberalism).  By doing so, Peterson boiled Genesis down to a timeless self-help book.  He imposed a modern meaning on an ancient text, and thus missed the original message, context, and even literary style.  That was disappointing but not surprising.  Even more so, I believe it contradicts his exemplary critique of post-modernism.  Post-modernism, at least generally, places authority on the reader as opposed to the author of a text.  With Genesis, Peterson did just that.  He became authoritative over its author in determining its meaning.

Jordan Peterson’s interpretation of the Bible is the articulation of something other than Christianity.  There I said it.  He uses the Bible to offer a Christless religion that promises temporal salvation through morals.  There is no blood-atonement.  There is no hope of the resurrection.  There is no divine removal of guilt.  There is no death of death.  To him the Bible offers absolute morals without absolute theology.  Peterson’s religion is man-made and man-centered.

To be clear, I see Peterson as a good gift of God’s common grace when it comes to his position on a number of social issues.  He’s calling people to live virtuously and to think about future consequences.  He’s challenging the faulty presuppositions of the elites on their own turf.  For that I am grateful.  But while he’s fearless in the face of the elites, he also appears to be fearless in the face of God’s Word.  The Bible is not just a helpful book that leads to a good life and prosperous society.  It’s the written Word of God before which we must tremble.  It offers the keys to abundant life and eternal life.