Soul-Winning by Urging the Lost to Make a Decision

Being born-again occurs in an instant.  Inwardly, the Holy Spirit turns a heart of 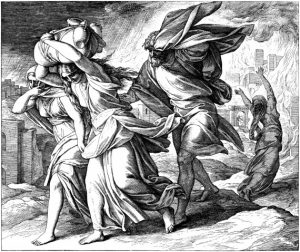 stone into a heart of flesh.  Outwardly, the convert professes faith in the promise of the Gospel.  Faith is a response to the written or spoken word which urges sinners towards God.  I really enjoy telling people about Jesus and urging them to believe the Gospel promise.  In what follows, I share three evangelistic stories whereby I urged people to believe the Saviour and God used my urging to usher souls into His Kingdom.  I hope these stories will encourage you, dear reader, to bring people to a point of decision by urging lost sinners to believe the Gospel.

IN THE INTENSIVE CARE UNIT

John was a retired labourer and WWII veteran who had fought in armed combat in the European theater.  He was lost, and he had resisted the Gospel for many decades.  His wife was a faithful member of my congregation.  She attended Sunday School, prayed at every prayer meeting, and was typically smiling and nodding during my sermons.  She loved the Saviour, and she had been praying for her husband’s salvation for decades.  So I went to visit him.  I shared the Gospel with him and urged him to repent.  He refused.  I went again and again and again.  He refused and refused and refused.  I kept praying for John and so did his sweet wife.  John was eventually diagnosed with cancer, and that wicked disease riddled his entire body with painful tumors.  He could hardly eat or drink, and he couldn’t walk.  I visited him again, I urged him towards faith, and he refused.  I went to his house to help the nurses lift him from his bed to his chair.  He still refused the Gospel call.  One day, his wife called me.  John was hardly conscious in the hospital’s ICU.  John requested that I visit.  I jetted to the hospital, held his hand, and asked him to squeeze my hand if he’d like to put his faith in Jesus.  He feebly squeezed my hand, and I led him in a prayer to receive Christ.  Within a few days I preached his funeral sermon, and I told the congregation John was with the Saviour.

Someone in my congregation had an ill relative who I visited in palliative care.  God had already graciously visited that entire family with salvation so our time consisted of mutual edification and prayer.  But the roommate of the congregant’s ill relative was lost.  Her name was Kathleen.  She was middle-aged, and she was preparing to die within the next few months.  Learning that she was lost and learning that that Christian family had been praying for her, I, with Will Schuurman, decided to pay Kathleen a visit and gently push her to believe in Jesus.  Kathleen was ready to receive Christ.  Having explained the simple message of salvation to her, she quickly said she’d like to put her faith in Jesus upon us urging her to do so.  A few weeks later and being very frail, she managed to muster up enough energy to attend church and be baptized.  Within a very short time, she fell asleep and went home to the Saviour.

A new family had started attending the church.  The couple, Jake and Suzie, had small children.  Wanting to show them hospitality and also wanting to assess their spiritual condition, Joanna and I invited them over for lunch.  At the lunch table, I asked some probing questions and quickly discerned that they were outside of Christ.  So, while their little children ran around and as our food digested, I shared the Gospel message and urged them to believe in Jesus.  Both husband and wife responded with saving faith, and I led them in a short prayer in my kitchen over dinner amidst the din of energetic little children.  They were later baptized, and they’ve since borne fruit for their gentle Saviour.

Salvation is a work of God.  God uses means.  Our urgent pleadings with the lost to trust the Saviour are often His chosen means to win souls.  I’ve shared three stories.  John, Kathleen, and Jake and Suzie were once lost, but now are saved.  They were saved after being urged to put their faith in Jesus.  I have many more stories, and maybe I’ll share them another day.  I hope you find them encouraging, and may God use these stories to strengthen you to urge people to have faith in Christ, to bring lost sinners to a point of decision, and to become wise to win souls.