Penal Substitution in the Gospels 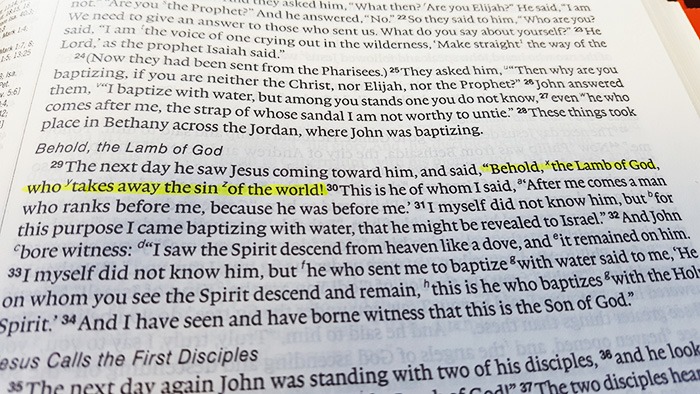 Jesus Christ died on the cross as a propitiation for our sins (1 John 2:2). He bore our sins in his body on the cross as our substitute (1 Peter 2:24). In doing so, he pacified the wrath of God on behalf of his people. This is known as the doctrine of penal substitutionary atonement (PSA). This doctrine is the heart of the gospel, has been widely held and preached throughout church history, and is currently at the center of a very significant theological controversy here in Canada.

Recently, I have seen some critics of PSA argue that this doctrine is absent from the Gospels (especially from the so-called “red-letters”). This is simply not true. This article will demonstrate that there are themes, terminology, symbols, and references found in the Gospels, especially in the sayings of Christ, that are clear allusions to, if not explicit statements of, the penal substitutionary work of Jesus Christ on the cross. If the New Testament only consisted of Matthew, Mark, Luke, and John, we would have more than enough evidence for the doctrine of penal substitution. Consider these eight reasons why.

This prophetic statement that Jesus makes about himself has clear allusions to the Suffering Servant of Isaiah 53. The idea that Christ came as a servant hearkens back to the Servant Songs of Isaiah. Mark has already referenced these songs in his gospel and so this would be in continuing with that theme. And since the language used in Mark 10:45 closely resembles the language used in Isaiah 53:12 (especially in the Greek versions of these two verses), the Suffering Servant of Isaiah 53 is in view. It has been “almost universally assumed that [Mark] 10:45 derived from the suffering of the servant in Isaiah 53:10-12.”[1]  Thus, in Mark 10:45, Jesus identifies himself as the one who bore our griefs (53:4), carried our sorrows (53:4), was pierced for our transgressions (53:5), was crushed for our iniquities (53:5), had the iniquity of us all laid on him (53:6), made an offering for guilt (53:10), bore our iniquities (53:11), was numbered with the transgressors (53:12), and bore the sin of many (53:12). He is the Suffering Servant who was smitten by God (53:4), crushed by the LORD (53:10), and was put to grief by him (53:10). The penal substitutionary sacrifice of Jesus is clearly laid out in Isaiah 53.

Moreover, the concept of Jesus dying as a ransom for many also reinforces the thought of substitution. A ransom is the payment made to release someone from slavery. Thus, Jesus gives his life as payment for our freedom. His death paid the penalty for our sins. So although the word “ransom” is not found in Isaiah 53, it still provides “a perfect summary of the servant’s vicarious death on behalf of many others.”[2]

Jesus is called “the Lamb of God” twice in John 1. This phrase is jam-packed with Old Testament themes of substitution and sacrifice. When we consider that Jesus is “the Lamb of God”, we are reminded of when Abraham told Isaac that God would provide a substitute lamb for the sacrifice (Genesis 22:8). We remember the Passover lamb that was sacrificed so that God would spare the lives of his people (Exodus 12:1-13). We recall the lamb led to the slaughter in Isaiah 53:7 (again, a reference to the Suffering Servant) who was stricken for the transgressions of his people (Isaiah 53:8). And we also think of the lamb without blemish that God required to be sacrificed as a sin offering for atonement (Leviticus 4:32-5:6). Under the OT sacrificial system, “the shed blood of the substitute covered the sins of others and appeased the divine wrath by way of atonement (cf. 1 John 2:2; 4:10).”[3] Therefore, in saying that Jesus is “the Lamb of God who takes away the sin of the world,” John the Baptist is saying that Christ takes away sin through his sacrificial, substitutionary death.

Hours before his arrest, trial, and subsequent crucifixion, Jesus prays to the Father asking that, if it be possible, the Father would let the cup pass from him. What does Jesus mean by “the cup”? And why does Jesus request that this cup “pass from” him? Furthermore, why did Jesus “sweat drops of blood” (Luke 22:44) as he considered this “cup” he was about to drink? Surely this “cup” must represent more than just the physical suffering he would endure on the cross, for many before him and many after him would experience such suffering, including his disciples. The Old Testament helps us answer these questions. The cup is a common Old Testament metaphor. Consider these verses:

You can see that in the Old Testament, “the cup” is symbolic of the judgment and wrath of God. Jesus experienced great anguish, sweat drops of blood, and desired that the cup would pass because he knew that he was about to bear the wrath of God toward sin on the cross. He knew that he would be punished in our place as a substitute for sinners.

4. Jesus was “Numbered with the Transgressors”

“For I tell you that this Scripture must be fulfilled in me: ‘And he was numbered with the transgressors,’ For what is written about me has its fulfillment.” – Luke 22:37

Here Jesus explicitly identifies as the Suffering Servant of Isaiah 53. The prophecy, “And he was numbered with the transgressors,” comes straight from Isaiah 53:12. While other texts in the Gospels allude to Isaiah 53, this text explicitly quotes from it. In Luke’s Gospel, this quotation from Isaiah 53 appears at the beginning of the passion narrative so that his readers might “understand Isaiah’s fourth Servant Song as the hermeneutical key to the narrative of Jesus’ suffering and death.”[4] Why is this important? What is the theological significance of Jesus quoting Isaiah 53:12 as being fulfilled in him? Listen to how one commentator seeks to answer these questions, “By mentioning the fact that he, though conscious of his innocence, in fact of his holiness, will, in fulfillment of prophecy, be numbered with the transgressors, does he not clearly imply that his death is substitutionary in character? Would Jesus have quoted these words from Isaiah 53:12 if he had not also believed the words which immediately follow: ‘yet he bore the sin of many and made intercession for the transgressors’? How tragic that, once again, the disciples do not understand the meaning of Christ’s words.”[5] Thus, Christ quotes Isaiah 53:12 as being fulfilled in himself to shed light on how he was about to be pierced for our transgressions and crushed by the LORD for our iniquities as the Suffering Servant.

“Whoever believes in the Son has eternal life; whoever does not obey the Son shall not see life, but the wrath of God remains on him.” – John 3:36

6. Jesus: “For Their Sake I Consecrate Myself”

“And for their sake I consecrate myself, that they also may be sanctified in truth.” – John 17:19

The language that Jesus uses here closely resembles language used of Old Testament sacrifices. Sacrifices for sin in the Old Testament are substitutionary by their very nature. An animal without blemish would be sacrificed to appease God’s wrath as an atonement for the sins of his people. The animal would be sacrificed for the sake of God’s people. Here in John 17:19, Jesus is reminding us of his self-sacrifice. The words “for their sake” imply the substitutionary nature of Christ’s sacrifice. The word “consecrate” alludes to the sacrifice itself. To consecrate means to “set apart”, much like an animal would be “set apart” for sacrifice. Commenting on this verse, Carson explains, “If Jesus consecrates himself to perform the Father’s will, he consecrates himself to the sacrifice of the cross – a theme he registers elsewhere. The point is intimated in this verse by the fact that Jesus sanctifies himself for them: the language is evocative of atonement passages elsewhere. It is also evocative of Old Testament passages where the sacrificial animal was ‘consecrated’ or ‘set apart’ for death – indeed, of language where consecration becomes synonymous with the sacrificial death itself.”[6] Thus, in John 17:19, Jesus reminds us that he has been set apart to die as a wrath-appeasing sacrifice in our place.

7. Jesus’ Blood “Poured Out for Many”

This short verse is teeming with Old Testament meaning. Jesus institutes the Lord’s Supper during Passover. When he identifies the cup of wine with his own blood that will be poured out, he is identifying with the Passover lamb whose blood was shed to save Israel’s firstborn sons in Egypt. Jesus is the new Passover lamb whose blood was shed for our salvation. However, there are also again clear allusions to the Suffering Servant of Isaiah 53. Isaiah 53:12 says that the Servant’s soul would be “poured out” to death and that he would bear the sins of “many.” Further, the final phrase “for the forgiveness of sins” recalls how Christ would die for the sins of his people (Isaiah 53:5-6,8,10,11,12). We’ve seen several times now that Isaiah 53, a passage that clearly articulates the penal substitutionary atonement of Christ, is central to his teachings on his death and what it accomplished for his people.

Finally, we arrive at one of Jesus’ final sayings before he breathed his last. This is a saying he uttered from the cross itself. The very context of this verse is his crucifixion and thus this verse sheds light on what Jesus was experiencing as he hung there with nails in his feet and hands. Jesus could have asked why the Jews rejected him or why Judas betrayed him or why the disciples abandoned him or why the Romans were crucifying him, but instead he cries out, “My God, my God, why have you forsaken me?” This is a quote from Psalm 22:1 that David wrote when he too found himself in dire circumstances and felt forsaken by his God. But why would Jesus utter such a phrase here? It’s because Jesus was forsaken by the Father as he hung there on the cross. Why? Because he who knew no sin became sin on the cross (2 Corinthians 5:21). He bore our sins in his body (1 Peter 2:24). He was pierced for our transgressions (Isaiah 53:5) and crushed by the LORD for our iniquities (Isaiah 53:10). He was now drinking the cup of God’s wrath that caused him to sweat great drops of blood only hours earlier in the Garden of Gethsemane (Luke 22:42-44). We cannot imagine the agony that Christ went through in our place. He was forsaken that we might be forgiven. Let me close with these words from Spurgeon, commenting on this text:

“In order that the sacrifice of Christ might be complete, it pleased the Father to forsake his well-beloved Son. Sin was laid on Christ, so God must turn away his face from the Sin-Bearer. To be deserted of his God, was the climax of Christ’s grief, the quintessence of his sorrow. See here the distinction between the martyrs and their Lord; in their dying agonies they have been divinely sustained; but Jesus, suffering as the Substitute for sinners, was forsaken of God.”

[5] New Testament Commentary: Exposition of the Gospel of Luke, p. 977.

[6] The Pillar New Testament Commentary: The Gospel According to John, p. 567.