The Sermon on the Mount: A Personal Testimony

As God took Moses up into Mount Sinai to give him the Law written on tablets of stone, so Jesus took His disciples up the mountain to give them the Law written on human hearts with His Sermon on the Mount. Throughout, Jesus expounds and applies the Law of God in a way that penetrates the heart to ruthlessly expose sin and demand the fruit of regeneration.

The Sermon on the Mount communicates at least two things to believers. First it communicates the depths of our rebellion against God. For example, Jesus exposits the sixth commandment: “You shall not murder.” At first glance, many could hear that commandment and think well of themselves. After all, many have never murdered another human being. And the few who have murdered typically only do it 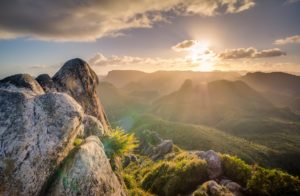 one or two times. But Jesus takes the command back to first principles and applies it in a way that truly capture the holiness of God. Why does God forbid murder? God forbids murder because murder is the victimization of a divine image bearer, and God loves divine image bearers. In going back to first principles, the sixth commandment is not only a prohibition against murder, but it is a prohibition against rage and cutting insults: “But I say to you that everyone who is angry with his brother will be liable to judgment; whoever insults his brother will be liable to the council; and whoever says, ‘You fool!’ will be liable to the hell of fire” (Matthew 5:22). The Law of God is the communication of the holiness of God, and Jesus takes the Law back to the first principles of holiness. He boils holiness down to its most basic application. In this case, the value that God places on human is life is so great that angry insults earn the angry insulter a place in hell. No one escapes the condemnation. Everyone who listens to the Sermon on the Mount, if he has ears to hear, will leave condemned. That’s the first thing it does. It communicates our sinfulness.  It empties us of our self-sufficiency.

Secondly, it communicates the heart of the Christian. While no Christian is fully sanctified, each Christian has a new heart. The Holy Spirit is poured out so powerfully in the New Covenant that our hearts of cold stone are transformed into hearts of warm flesh. Those warm hearts of flesh, instead of producing the fruit of a cold heart of stone, produce the fruit of the warm heart of flesh. The new heart produces the fruit of the Spirit. Moving back to our earlier example, we look at the sixth commandment: “You shall not murder.” The Christian, because he has been born again, will not only not murder, but he will grow in love towards his neighbours. He will not only avoid spewing cutting insult at people in anger, but he will love people with tenderness. The prohibition to not murder is a negative command. The Christian obeys the negative command. But, further to that, his heart grows so tender that he increasingly obeys the positive command to love his neighbours and his enemies. He does not just “not murder,” but he also does to others whatever he wishes others would do to him (Matthew 7:12). The commandment not to murder now moves to a commandment to have boundless love. Instead of being only bound from murder we are created to boundlessly do good to others. Doing good to others includes not murdering them, and it also includes feeding them when they are hungry and clothing them when they are naked. Again, as the Christian produces fruit, his actions are loving because God has given him a new heart that loves. That is the second thing the Sermon on the Mount does. It describes the new heart that comes by the Holy Spirit’s power.

Firstly, it has caused me to cast myself on the mercy of Christ. I examine my life in light of the Law of Christ, as it revealed in this penetrating sermon He gave, and I realize how sinful I am. I realize that I deserve the hell fire Jesus talks about. I deserve to be thrown like a piece of garbage into a dump outside Jerusalem and set ablaze. How many times have I paused in my study to ask God to forgive me? More than I can count. “Blessed are those who mourn for they shall be comforted.”

Secondly, it has caused me to beg God for obedience. I do not want to be like the Pharisees who had an outward conformity to their religious standard but were not changed inwardly. They were whitewashed tombs. They knew how to look religious and put on a show, but they had never experienced the power of a transformed heart. I desire to bring forth the fruit of righteousness and kill my own sin. In this pursuit, I find great joy and hope: “Ask, and it will be given to you; see, and you will find; knock, and it will be opened to you.” When I seek a changed heart, God promises to give me one. “Blessed are those who hunger and thirst for righteousness, for they shall be satisfied.”

Thirdly, it has confirmed the Spirit’s work in my heart. As I have examined my life in light of the Sermon on the Mount, I can note changes in my disposition since my conversion. Apart from Christ, I would still stand condemned as a sinner, but I can see how the power of God has produced change within my heart over the years. I am less self-righteous and judgmental than I was years ago. I am more disposed to kindness and love than I was years ago. I hunger for righteousness more earnestly than I did years ago. So I read the Sermon on the Mount, and I can thank God for his kind work of grace in my heart. I tangibly note His regenerating and sanctifying power. It has all come from Him, and I am grateful for these kind affirmations of the Spirit’s work.

Fourthly, I have rejoiced more over what God is doing in our church. As I preach the Sermon on the Mount, I look out on a congregation that hates lust more than it used to. I see a church that is more inclined to comfort the hurting better than it did years ago. I see people who have grown in their willingness to sing in worship from their hearts. I look out at our congregation, and I see the light of God’s Kingdom rising. I rejoice. God, by His power, is doing a work among us. We are blessed.

Sixthly, it has caused me to love the Law of God more. I can see more fully the wisdom of God in His Law. He has put holiness on display in His Law. The Sermon on the Mount takes that Law and applies it deeper than just letters written on stone. It does not nullify the letters on stone, but it takes those letters and puts them on the heart. And I have felt my heart boiling over in warmth as I’ve considered God’s perfect standard and how deeply it penetrates my being.

Eighthly, it has increased my thankfulness for the Saviour. He fulfilled the Law so that I can be blessed. We receive the blessings of the beatitudes because Jesus received the cursings of the Law. God looks on me and says, “Blessed are the meek, for they shall inherit the earth,” because God looked on Christ and said, “Cursed.” He was cursed undeservingly so I can be the underserved recipient of blessing. The Sermon on the Mount never says, “Christ bore your sin and was cursed by God,” in so many words. But it does say, Christ came to “fulfill” the “Law” and “the Prophets” (Matthew 5:17). In fulfilling them, He at the very least obeyed them perfectly and also bore the penalty of the Law fully. As the perfect law keeper, Jesus Christ was also the perfect bearer of the Law’s curse. He obeyed the Law fully, and yet he received the full curse for the full disobedience of the full Law. In studying the Sermon on the Mount, I see the sacrifice of my Saviour. And my heart wells with thanksgiving.