A Response to TGC Canada’s Statement on Bruxyianity

I have wished over and over to remove myself from this miserable mess.  The value of souls and the preservation of the Gospel for future generations propels me to reluctantly respond to The Gospel Coalition’s latest blog on the fiasco.  Their latest blog is an attempt to sum up their shared convictions on Paul Carter’s recent interviews with Bruxy Cavey.  If you’d like to get up to speed, you can read the history here.  In writing this response, I am firstly writing out of care for those within my own charge who read The Gospel Coalition, as I have been openly appreciative of much of their ministry.  I really dislike disagreeing so publicly with TGC, and it is something I am reticent to do.  I am also writing to those in the world-wide-web who will stumble upon this little blog.  I’ve heard stories of people—multiple people—who’ve been troubled over teachings at The Meeting House, but they, after reading the material from The Gospel Coalition, have decided things ain’t so bad under Cavey.  So they stay there and keep their families drinking in all the Bruxyianity.  I hope this will be helpful.

THE COMMENDATION TO CAVEY

The TGC article begins with some perceived strong points within The Meeting House’s ministry.  It reads:

Through the dialogue, we have come to appreciate certain aspects about the ministry being conducted at The Meeting House.  In particular, we point to their efforts to reach unchurched Canadians.  We agree that this is an urgent need in our generation, and we appreciate their attempts to reach younger Canadians in winsome ways.

I am quite happy to offer a commendation where one is due. Yet, is this really commendable?  The Meeting House is certainly employing an attractive tone to sell their ideas to people.  To say “we have come to appreciate” goes too far.  It assumes that they are actually attempting to reach people with something worthwhile.  I have no doubt that many within the organization believe they are attempting to reach people with the Gospel.  I am also confident that the pastors who work in the United Church of Canada believe they are reaching people with the Gospel, and so the same with those at your local Kingdom Hall.  The problem is they are using happy demeanors and sweet-hearted language to lead people over a cliff, and they call the 10,000 foot fall onto jagged rocks “Gospel.”  If TMH is offering the Gospel, then they deserve this commendation.  If they are offering poison, they deserve a severe dressing down.  If TGC is unsure which it is, TGC must avoid the commendations until they discern for themselves.

The language that TGC uses to describe their disagreement with Cavey’s teaching does not strike the appropriate level of urgency.  It reads:

While we appreciate these aspects of the Meeting House’s ministry, we nevertheless continue to hold to our distinctive beliefs and values as a community of reformed evangelical believers.

With all these matters in mind, our conclusion is that while we love and respect our neighbours at The Meeting House, we cannot in good conscience at this time endorse them nor follow the teaching of Bruxy Cavey on the above issues.

And this makes sense when we consider that The Meeting House itself would not be able to enroll their congregations in our church finder in good conscience because they can not affirm our foundation documents.  Both of us genuinely disagree with the other on important theological matters. (emphasis mine)

Using phraseology like “distinctive beliefs and values” and then later pitting the respective beliefs against each other as a matter of respectful disagreement in good conscience softens the level of urgency. For me, I “cannot in good conscience at this time endorse” the paedobaptism of Jonathan Edwards, but I must outright condemn the teachings of Bruxy Cavey.  To be clear Cavey has denied PSA, stated he’d like to convert people away from it, attacked the inerrancy of Scripture, and has also promoted a third way for homosexuals.  Yet, TGC’s phraseology so sweetens Cavey’s errors that an uninformed reader could readily assume this is just a minor discrepancy. If the statement were appropriately clear, I doubt Cavey would have been able to respond with this tweet: 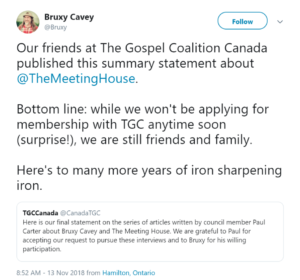 If Bruxy Cavey were to spin just a sentence or two or three from the blog, that would be his fault.  But when he’s able to offer the entire article as evidence that TGC sees him—yes, him, the one who’s said he’d like to convert people away from PSA, who’s attacked the inerrancy of Scripture, who’s called the authority of Scripture unscriptural, and who’s opened up a third way for homosexuals—as a family member they’re sharpening, Cavey does not bear the fault alone.  A clear statement would not open itself up to this level of spin.  The mild choice of words does not suit the severity of the error.

BUT THIS IS NOT ABOUT WORDS

One of the ways Cavey has couched this again and again is by making this about words.  He alleges that we’re sounding alarms because he won’t say words like “inerrancy” which he has mockingly equated with “theological comfort food.”  If our concern is over words, it is more minor.  The major concern all along has been that Cavey attacks fundamental doctrines, the doctrine of biblical inerrancy being one of them.  Yet, TGC allows the issue to be less than it is:

Throughout this discussion, we have had a renewed opportunity to articulate our theological understanding, and we think there is deep wisdom in using certain time-tested language that was the subject of much conversation in the dialogue between Paul and Bruxy.

We hope and pray that the Meeting House will come to use the language of inerrancy to describe the Bible. It is a useful and clarifying term that will help ensure that the Word of God and not the opinions of people serves as the authority for what is trustworthy, beautiful, and true.

To be absolutely fair, TGC does not only affirm the words in question, but they go to great lengths in this article to affirm the specific doctrines.  We should be thankful for that.  Yet, while TGC affirms the doctrines, they cushion their disagreement with Cavey by making it about vocabulary and words.  They hope Cavey will affirm the same words.  How about calling Cavey to repent for opposing the faith that has come down to us on martyrs’ hands?  I have documented over and over that Cavey attacks concepts.  He opposes concepts.  He undermines actual doctrines.  He seeks by his own admission to convert people away from the core of the Gospel.  That TGC does not deal with this is a serious mistake.

The article highlights the divergent use of language between the evangelical and anabaptist traditions. They are two different streams of tradition, and thus it is only fair for us to expect that things are dealt with differently.  It would not be fair for evangelicals to only judge anabaptists by the standard of our own history.  Scripture is our final arbiter, not history.  That all sounds very nice, and I agree mostly.  The problem is twofold: First Cavey, anabaptist or not, teaches against actual Scripture, and second Bruxy Cavey does not find his theological origins in an anabaptist tradition.  His church might.  His denomination might.  But he does not.  In his own blog of July 4, 2018, Cavey says:

This was me when I first heard about the Anabaptist denomination I am now a part of – Be In Christ Canada (formerly, the Brethren In Christ).  I was an Evangelical with Reformed/Calvinist theology at the time I heard about the BIC.

Had The Gospel Coalition website not already offered “Props to Bruxy Cavey” and had it not been a platform for Bruxy Cavey to spin his teaching and had it not already stated definitively, “Bruxy Cavey is not a heretic.  He’s an Anabaptist,” I think I could have been more positive about this.  But I appraise it all in context of TGC’s large swath of recorded material on an influential pastor who has attacked the inerrancy of Scripture, has expressed desire to convert people away from PSA, and has opened up a third way for homosexuals.

With that, I close with what disquiets me most.  It is much more than a concern over theological phraseology and doctrinal precision, as much as I’m burdened by all that.  What disquiets me most is a great source of personal grief, and that personal grief is pastoral grief specifically.  I am disheartened by the dearth of urgent expressions of pastoral alarm for those who’ve been taken captive by Bruxyianity.  There are people who actually believe what Bruxy Cavey says about the Bible, about the atonement, and about all the other nonsense he teaches.  While TGC has attempted to model charity and civility, they have lacked the basic pathos and clarity needed to charitably warn the innocent onlookers that this is something more than a writing assignment.  These are not fussy little spats over verbiage and doctrinal precision.  We are not debating how many angels can dance on the head of a pin.  We’re dealing with an outright assault on the inerrancy of Scripture, not to mention the gutting of the Gospel of Jesus Christ.  Our Lord Jesus Christ has been maligned by one of Canada’s most popular pastors, and many call that maligning “Gospel.”  Souls are in danger, folks, and eternity is real.