I recently read an article that contrasted the Canadian and American identities and histories.  The context of the article was commentary on the American 2nd Amendment.  The author claimed that the American right to bear arms is rooted in the American impulse to live free.  I agree with that historical assessment.  The American Revolution was won by rag-tag American militias, with the help of the French army, who overthrew English rule.  Americans thus believe that a free man is a man who has a right to arm himself.  To be clear I have absolutely no interest of wadding into the issue of gun rights here.  That only happens to be the flash-point that’s prompted the discussion.

What I’m commenting on is a contrast the writer assumed between Canadian and American histories, at least in that Canadians do not have a revolutionary history per se. I find this assumption is all too common, and I’m writing here to correct it.

In saying histories, I’m not saying identities.  The two are different.  I do think the present Canadian identity is not as well informed by our history, but that’s another discussion.  Contrasting Canadian history with the American Revolution the article said that the Canadian “identity was not forged in the drama of sanctified sedition.”  To that I will offer three comments.

Second, I do not believe that “sanctified sedition” is the most accurate way to describe the Revolutionary War.  My next comment will clarify why I think that, and after that point I’ll explain this further. 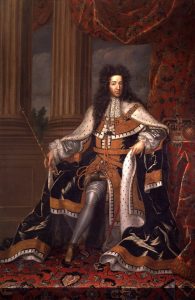 The Revolutionary Genesis of Canadian Society

Canadians did not actively revolt by war on this continent, true.  But our history is one of revolution against tyrannical rule, even against a corrupt monarchy.

The Glorious Revolution of 1688 is the last of such revolutions.  But there were even some before it.

In 1688, William of Orange arrived on England’s shores to displace King James II of England.  English Protestants were concerned over James’ Catholic tendencies, and parliamentarians believed he was becoming tyrannical in his attempts to impose laws upon Parliament.  The Protestants and parliamentarians invited William of Orange to protect parliamentary freedom and maintain the Protestant religion.  He arrived from Holland, and King James II fled to France.  William of Orange with his wife Mary became King and Queen under the pretense that they govern England by the statutes of Parliament and that the “Protestant Reformed Religion” be established by law.  Parliament enacted the Bill of Rights in 1689 which granted among other things freedom of religion as well as the right for Protestants to bear arms.

When North America was colonized, the English-speaking people brought with them that heritage and the assumption of those rights.  It would be wrong to say Canadians achieved national sovereignty by revolution, but it is equally wrong to say we do not have a revolutionary history.  The early Britons who landed in North America brought with them that sense of British identity, an identity that finds its history in revolutions against monarchs.  The song “The Maple Leaf Forever” captures that notion.:

In days of yore, from Britain’s shore,

Wolfe, the dauntless hero, came
And planted firm Britannia’s flag
On Canada’s fair domain.
Here may it wave, our boast, our pride
And, joined in love together,
The thistle, shamrock, rose entwine
The Maple Leaf forever!

The song tells the story: Canada came from Britannia.  Our laws and customs were a British import.  And “Oh Canada” contains a prayer that “God keep our land, glorious and free.”  That notion of freedom is an English import, and it is largely captured by the Bill of Rights which was printed after the Glorious Revolution of 1688.  Consider the verse from “Rule Britania”:

The nations, not so blest as thee,
Must, in their turns, to tyrants fall;
While thou shalt flourish great and free,
The dread and envy of them all.

“Rule, Britannia! rule the waves:
“Britons never will be slaves.”

Britons have historically seen themselves as a free people.  That sense prompted what happened in 1688.  Then in 1867, Canadians inherited a British system of parliamentary self-governance under a constitutional monarch.  The key is we inherited it.  From who did we inherit it?  From England.  It’s modeled after Westminster.  Our head of state, our executive, Queen Elizabeth II, is limited in her powers.  That limitation was upheld in and clarified after the Glorious Revolution.  Our present political system is the consequence of a revolt against a tyrannical king.

The American Revolution as an Heir of the Glorious Revolution

That brings me back to the second comment I listed above.  The American Revolutionaries probably saw themselves as English Patriots, not spawners of a “sanctified sedition.”  They believed they were loyal heirs of the Glorious Revolution of 1688 when they fought the American Revolution almost a hundred years later in 1776.  As the Protestants and parliamentarians had done before, they believed they were upholding the ancient rights of Englishmen.  Even the American 2nd Amendment, the right to bear arms, finds its genesis in the English Bill of Rights.

So all of that is to say that amidst a great deal of differing policies and outlooks, Canadians and Americans do share a common genesis of ancient rights and liberties.  My informed opinion is that Americans are only much more conscious of it than are Canadians.  Their identity tends to be more informed by history than our own does.  In a very real sense, Canadians are a people who find their history, their rights, and their system of governance in a revolution against corrupt kings.

Tout, T.F. A First Book of British History. Reprinted in Miami by HardPress.