After seventeen nights in a Calgary prison, Pastor Tim Stephens was released on Thursday to be reunited with his family and church. Many saw the video of Calgary police officers ghoulishly arresting him in front his wife and eight children. He spent his anniversary and fathers’ day behind bars. His crime? He gathered his church in obedience to his conscience and Scripture, in contravention of his province’s health dictates, to worship Christ on the Lord’s Day. Thankfully, he is now freed from prison, and tomorrow he will once again gather his church for worship and once again feed his sheep with the word of God. 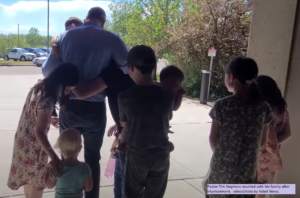 I’ve been reading through a little book by John Bunyan called Advice to Sufferers. John Bunyan knew something about persecution, as he spent thirteen years in an English prison for gathering congregations to worship without the state’s permission. In this little book, he lists four reasons that “may be a sufficient call to a man to suffer for righteousness.” Prior to the list, he notes that, “Suffering for a truth ought to be cautiously took in hand, and as warily performed,” and, “A man is not bound by the law of his Lord, to put himself into the mouth of the enemy.” In other words, it might not always be wise to strive to place ourselves under the wrath of the wicked. That said, there are very good reasons to suffer for righteousness. John Bunyan, in his little book, lists four such reasons. My assertion is that Pastor Tim Stephens, as per Bunyan’s assessment, suffered for good reasons. I will list Bunyan’s four reasons and explain.

First, when men suffer for living out God’s word they suffer for righteousness. Bunyan notes, “So then, if, while I profess the truth of Christ, and so walk as to make my profession of it more apparent, I be made a sufferer for it, my call is good, and I may be bold in God and in my profession.” If by walking the Christian walk and living the Christian life we walk into persecution, our suffering is for righteousness. This means letting our light shine (Matthew 5:16) and holding forth the word of life (Philippians 2:16). Bunyan sees suffering for the simple and harmless public worship of Jesus Christ as living out the word, and suffering for that worship is suffering for righteousness.

I will for this worship Christ as he has bid me; what hurt1 is this to anybody? I will also tell my neighbours what a loving one my Christ is, and that he is willing to be good to them as he has been good to me; and what hurt is this to the governor of a kingdom? But and if any man will afflict me for this, my cause is good.

Second, “There is sometimes a call to suffer for righteousness, even from the voice of necessity. That is, either when, by my silence, the truth must fall to the ground, or when, by my shrinking, the souls of other men are in danger.” What Bunyan means by this is that often the silence of the many is complicit in a lie against God, and therefore we must break the silence for the sake of truth and the souls of men. As an example, he explains that Goliath publicly blasphemed God, “and there was not a man, no, not in Israel, that durst answer him a word.” This moved David to action against Goliath as he reasoned in his heart, “I will go fight with him: will put my life in my hand; if I die, I die.” Similarly, Daniel, the prophet, heard silence when the king attempted to end the worship of God: “At that time, also, not a man of Israel peeped.” Daniel answered the call. His conscience could not stand for the silence, and he rose to the occasion to pray in the open (Daniel 6:10). Good men will act when their silence is a false witness against God. They cannot not speak. Bunyan explains, “But necessity has a loud voice, and shrill in the ears of a tender conscience: this voice will awake jealousy and kindle a burning fire within, for the name, and cause, and way, and people, of the God of heaven.” The government of Alberta had mandated various standards of worship – numerical caps on attendance and calls to go online being among the other mandates – for the church. That is not the government’s place, and Pastor Tim rose in word and deed to speak and embody the truth that Christ, not the state, is Head over the church. It was out of necessity, when most others were silent, that he embodied the truth by action. And for that he suffered. He suffered for righteousness.

Third, according to Bunyan, “There is sometimes a call to suffer for righteousness by the voice of providence.” This occurs when we carry out the duties assigned to us, and in doing so we suffer. Christ carried out the duty to pray in Gethsemane, and while praying Judas led His captors to arrest Him. God called the apostles to preach in the temple, and in so doing He “there delivered them into the hands of their enemies” (Acts 4:1-3; 20-26). Bunyan explains,

Be we in the way of our duty, in the place and about the work unto which we are called of God, whether that work be religious or civil, we may, without fear, leave the issue of things to God, who only doth wonderful things. And he who lets not a sparrow fall to the ground without his providence will not suffer a hair of our head to perish but by his order.

Pastor Stephens was arrested for doing his work. He is an under-shepherd, and the Chief Shepherd calls the under-shepherds to gather their sheep. Shepherds who let their sheep scatter are derelict and faithless (Ezekiel 34:5).  He gathered his sheep to worship Christ and feast on the Word. Then he, as he was duty-bound, went home with his family, and the police came to his doorstep to arrest him. He did not go looking for a beating. He was simply discharging his duties as a minister and a husband and a father. While carrying out those duties, the authorities arrested him. He suffered for righteousness.

Fourth, “There is sometimes a call to suffer for righteousness by an immediate and powerful impulse of the Spirit of God upon the heart.” Bunyan explains that Saint Paul experienced this impulse when he said he was bound in the Spirit to go to “Jerusalem, not knowing the things that shall befall me there” (Acts 20:22). This is a special call that not all men can appreciate, but it is reserved for certain men at certain times. Bunyan explains, “For he that is under this call has, as I said, bonds laid upon his spirit, which carry him to the place where his testimony is to be borne for God.” Those men who do not experience this extraordinary call should encourage the men who do receive it.  Bunyan elaborates,

The power of such a call as this, I say, is great, and men of ordinary spirits must needs give place thereto, and leave a man thus bound to the God that thus has bound him. All the help such can afford him is to follow him with our prayers, not to judge him or grieve him, or lay stumbling-blocks before him.

Pastor Stephens was especially bound to suffer in a public way. Some other pastors in Alberta gathered their congregations in defiance of the state and in obedience to Christ, but they did not receive any public attention or government retribution. God marked off Pastor Stephens to suffer in an extraordinary way. I first spoke with Pastor Stephens a few days after Pastor James Coates had been imprisoned for opening his own church. I noted, in that conversation and the ones that followed, that he was bound by the call of God upon his heart to maintain a public witness to Jesus Christ, and he was bound also to publicly demonstrate that his friend Pastor Coates was not alone in his convictions. Those principles, among others, bound him, and as such God gave him grace to persevere in obedience to his special calling to suffer in this unique way. He suffered for righteousness.

In the seventeenth century, the English Crown attempted to regulate worship and ministry with legislation. Many men suffered for embodying the belief that the church belongs to Jesus, not the state. John Bunyan was one such man, and he spent thirteen years in prison for living out his beliefs. He elaborates on his convictions in saying, “Lord, I cannot consent that human inventions and doctrines of men should be joined with thy institution as matters of worship, and imposed upon my conscience as such, and they make me suffer for that.” In his small book, Advice to Sufferers, he records four Scriptural reasons to suffer for righteousness. When men suffer for said reasons their suffering is for God. Pastor Tim Stephens has suffered for righteousness. He went to jail for obeying God. Like Bunyan and others, he has carried the torch and has shone the light brightly for Jesus. In his suffering, he has proclaimed that that the church must gather, he has modeled true pastoral ministry, and he has heralded that Christ is worthy. He has found himself, by God’s grace, in the blessed state of persecution. He is among God’s choicest servants, and, of such servants, John Bunyan says:

Let him, then, that believeth what is here discoursed, and that liveth soberly and peaceably in this belief among his neighbours, stand by what he hath received, and rejoice that he hath found the truth. And if any shall afflict or trouble him for holding of these things, they afflict or trouble him for holding to good things; and he suffereth at their hands because his cause is good.

Pastor Tim Stephens is, away from prison, now with his wife and children, and tomorrow he plans to be with his congregation.  May he be honoured among the beloved as heaven has surely smiled upon his obedience which led to his suffering.  He has suffered well, and he has suffered for righteousness.