We Found Billy: A Blessing of Persecution

Canadian pastors have their litany of excuses for handing their churches and their worship over to Caesar.  Over the last two years, premiers and legislatures have demanded that churches close, cease gathering, move online, etc.  This was the necessary sacrifice as the state heralded the good news of salvation from COVID-19.  Believe on the death of Christian worship, and thou shalt be saved.  The overwhelming majority of pastors have willingly gone along, with many patting themselves on the back for it.  They stopped worshipping Jesus, and they proclaimed that was their service to Jesus.  They have their reasons, and the reasons are manifold.

The Gospel Coalition Canada recently produced a blog, complaining that US media coverage of Canadian pastors “has hampered the Canadian church.”  To explain, they manufactured a caricature of a hypothetical Canadian Pastor named “Billy.”  In the hypothetical scenario, Billy – a “pastor with a history of divisiveness” who “mocks our Canadian commitment to process” and calls “his fellow pastors cowards” – holds an outdoor worship service and “preaches a jarringly candid sermon” that defies hypothetical newly minted hate speech legislation.  Billy gets arrested.  The US media picks up on the story which amplifies it in Canada, and that then hypothetically troubles The Gospel Coalition Canada pastors because it forces them “to answer questions from their own congregants about why they aren’t taking the approach Billy has taken” while “struggling to navigate their way through a horrible situation.”

It’s a pitiful piece, which puts more weight on what the author perceives to be the Canadian way than it does on the narrow and hard way of Scripture.  The author comes across as selfish, more concerned about his own ease than he is about Billy who’s in jail or Billy’s wife who’s without a husband or Billy’s children who are without a dad or Billy’s church which has been rattled or Billy’s persecutors who are on the road to hell or Billy’s Saviour who Billy goes to jail for.  It reads like a satire.

It does, nevertheless, present a very real scenario.  Canadian pastors have recently been fined and arrested.  And “the American Evangelical bullhorn” has broadcasted the stories.  Further, our federal government has been motioning to legislate against “hate speech,” which would criminalize jarring sermons against sodomy.  Meanwhile, with their churches suffering under tyrannical COVID rules, many pastors have sat on their thumbs, told their parishioners to follow-orders, criticized the Canadian “Billy” pastors, complied with the state, and told the world that persecution is non-existent in Canada.  I suspect not a few of those pastors have had some explaining to do within their own churches.

I’ve pondered that attitude some, and I believe it’s a bad attitude.  Let me explain.  First, we don’t pick our hill to die on.  We already died in Christ, and that means we decide to be faithful no matter what.  Second, it is a boastful presumption upon the future, which is something God forbids (James 4:13-16).  Third, and most importantly to this article, I haven’t believed them.  I don’t believe they’ll stand.  I hope I’m wrong, and I’ll admit if I am.  I doubt I am.  In fact, I believe that if it comes to that, some other pastor – let’s call him “Billy” – will stand and get in trouble with the law.  When he does, the others will say, “Billy wasn’t winsome like us, and therefore Billy got what he deserved.  No persecution to see here folks!”  Theologians will verify that it’s Billy’s fault to the secular media, and they’ll explain that Billy is not like John Bunyan.  Then a Canadian subsidiary of a US Big Eva organization with over 1 million followers on its social media platforms will complain that American Christians talk too much about Billy.  It makes them look bad.

Why am I so pessimistic on this?  I’ve watched how our leaders have operated for a long time, and I know how many of them preach.  They sure don’t preach “jarring sermons” against sodomy, and they sure don’t say words like “sodomy.”  They waste their energy trying to navigate the Canadian cultural milieu, which is French for “friendship with the world” which is Bible for “enmity with God” (James 4:4).

To demonstrate why I think this, I’ll provide two examples.

My first example is Paul Carter at The Gospel Coalition Canada.  He has produced pages defending an influential Canadian heretic (here, here, here, here, and here).  The heretic denies penal substitutionary atonement (here), attacks the inerrancy of Scripture (here), and has a third way for homosexuality in his church (here,  here, and here). Dismissing said heretic’s heretical statements as potentially a “Scottish brogue” that takes work to truly understand, Carter applauds the heretic for his tone.  Meanwhile Carter has been quick to excoriate faithful pastor John MacArthur for his tone, without ever checking to see if he speaks with his own brogue.  He defends an enemy of the church, and he attacks a faithful pastor.  He also has a vested interest in making people believe that persecution hasn’t existed in Canada (see here and here).  If the hate speech bills do come, I can anticipate Carter excoriating Billy’s tone, while whitewashing Bruxy’s compromise.  He’s already done it.

Another example comes from one of Canada’s most conservative seminaries.  A blog of January 2020 was written on the topic of unity and diversity in the context of homosexuality.  I note two quotes from the blog on the seminary’s website:

While I had coffee with two good friends this morning, part of our conversation was about two evangelical churches that have chosen to accept diverse views and practices concerning same-sex unions.

I know that there are persons committed to Trinitarian orthodoxy and an evangelical understanding of the gospel who also believe that faithful same-sex unions can be affirmed, so I see no basis for declaring that they are condemned, even though I am convinced that they are wrong.

The author draws our attention to “evangelical churches that… accept diverse views and practices concerning same-sex unions,” and he affirms that they can be “orthodox” with “an evangelical understanding of the gospel” while they also affirm “faithful same-sex unions.”  He notes they are wrong, but they ought not be “condemned.”  After all, according to the author, they are “evangelical,” “orthodox,” and have “an evangelical understanding of the gospel.”   He downplays the severity of the sin, to the point of saying that churches who tolerate it ought not be condemned, even though Jesus condemns them (Revelation 2:20).  This is not the language that is likely to get you arrested in the soon-to-be homocratic regime, but calling it a “homocratic regime” likely is.  That will get you arrested because that is kilometers beyond the tone of the Canadian cultural milieu.

When someone laments the hypothetical American attention given to a hypothetical Billy who gets arrested for preaching a “jarringly candid sermon” my suspicion is that some pastors are already anticipating having to justify hypothetical future compromise.  They’ve had to justify their compromise during lockdowns, and they found that unpleasant.  They’re looking to that future hill that they’ve said they’d die on, and they know that when they don’t die on it they’ll have more unpleasant explaining to do.  And my suspicions, given what I’ve noted, are not unfounded.  It’s founded in real time, not some hypothetical future.   When that hill comes, I doubt they’ll die on it because they haven’t died to trying to find the Canadian cultural milieu.  They haven’t died to friendship with the world.  They haven’t died to wanting to be more Canadian than Christian.

Instead, not offending the Laurentian consensus while half-heartedly subscribing to an orthodox doctrinal statement has become the definition of a faithful ministry for far too many Canadian pastors.

Thankfully, the last season has revealed who those pastors are.  That’s not to say they can’t find forgiveness in Jesus.  They can.  He shed his blood for cowards and derelicts and traitors, and by faith they too can be justified.  But without repentance even with tears like Esau, forgiveness will not be found.

Some good news is we have found Billy.  Billy is the pastor of faithful churches across this land, and we know that Billy is likely to be faithful when the next hill comes for him to die on.  Billy inspires courage by courageously putting himself between his sheep and the beast.  Billy died in Jesus who died on Calvary’s hill.  Billy died to his own reputation.  Billy died to the Canadian cultural milieu and the Laurentian consensus.  Billy cares only what Jesus thinks, and Billy is a champion for Jesus.  Billy is faithful.  Billy is courageous.  Billy is fearless.  Billy hates what is evil and clings to what is good.  Billy is ready for deployment.  Billy doesn’t pick his hill to die on.  Billy just dies.  Billy will die lonely if he has to, as long as he gets to die for Jesus.

Through all this I’ve met some of the various Billys around this nation, and I absolutely love them.  Mostly they’ve been serving away in the shadows, with no desire to be known or become the big fish in the little pond of Canadian evangelicalism, and now their faithfulness has garnered them some attention.  Naturally, that’s upset the ones who tried to trade for attention.  They thought brokering faithfulness and worship and ecclesiology would earn them standing.  Billy didn’t care about standing.  So Billy stood and did what’s right.

With one group having been busy trying to explain their unfaithlessness — too busy justifying their actions to stand up for Billy and stand up for Billy’s Saviour — some American brothers have stood with Billy.  I’m thankful for those brothers south of the 49th.  They helped Billy, and they helped us find Billy.  They told us who Billy is. Billy found Billy who also found Billy, and now all the Billys are friends.  And, let’s thank God fo 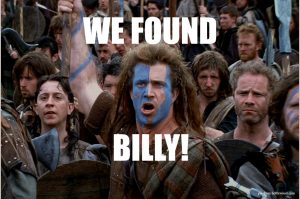 r that.  A lot of Christians have been looking for Billy for a while.  Billy has been looking for Billy.  Billy didn’t know Billy existed.  God works all things together for the good of those who love Him.  He worked the tyranny for our good.  It’s been a time of sifting.  Gold now shines from mine-shafts we didn’t know existed.  The paint has pealed from the fool’s gold.  Thank God.  We found Billy.  And Billy led us to worship Jesus.