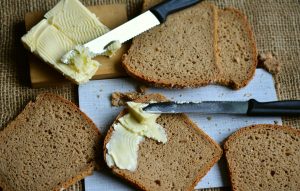 There’s something about food that brings comfort.  The taste, texture, nutritional value, and the sense of satisfaction that comes when the pallet is finally cleansed.  It is good, and it is from God.

In light of this, Jesus’ forty days of fasting in the wilderness is astonishing.  The Bible says “he was hungry” (Matthew 4:2).  I guess so!  Knowing the Lord’s hunger, the devil tempted Jesus to turn stones into loaves of bread.  It’s not that Jesus couldn’t do that.  We know he could.  But, He had nothing to prove to Satan.  So He wouldn’t budge.  He refused Satan’s challenge.

Moreover, Christ had to fulfill all obedience on our behalf.  Historically, His people have chosen food instead of God.  Eve, for example, lived not in a barren wilderness like the one Jesus found Himself in.  No, she lived in a lush garden, and she had no reason to be hungry.  Yet, the same devil who tempted Jesus in the barren wilderness with food also tempted Eve in the lush garden with food.  Instead of choosing to obey God’s commands, she chose food.  Jesus chose to trust God over food.

A similar thing happened with Esau.  He was famished for having been outside hunting.  So hungry was he that he said he’d die without food (Genesis 26:32).  So Esau caved and sold his birthright for a bowl of soup.  As firstborn he appeared to be heir of what God promised his father, Isaac.  But at that moment the comfort of food was the priority.  He despised the promises of God, but he loved food.  Jesus is better than Esau.  He chose to trust God over food.

After the Israelites had left Egypt, they, like Eve and Esau, had eating issues.  God released Israel from Egyptian slavery, and immediately they started to complain.  They wanted food.  Like Esau, they figured they’d die without it.  They imagined things were better under Pharaoh than under God (Exodus 16:3).  God sent them manna, and every morning they were to gather it.  Only enough was to be gathered to feed them for the day.  Some gathered too much, and by doing so they proved they found comfort in food more than in God’s verbal promise to provide.  Unlike the Israelites, Jesus trusted God in the desert.

The people continued to grumble about the manna also.  They weren’t satisfied with the provision of bread, so again they longed to go back to Egypt (Numbers 11:4-6).  God’s anger burned against them, and in anger He sent them quail to eat.  They would eat it until it came out of their nostrils (Numbers 11:19-20).  God gave them what they craved, but even that was not enough so God’s anger rose against them and He killed the strongest of them (Psalm 78:21-31).  Unlike the Israelites, Jesus trusted God in the desert.  Jesus is better than His people.

When Satan tempted Jesus to turn the stones into bread, Jesus’s reply was significant: “It is written, ‘Man shall not live by bread alone, but by every word that comes from the mouth of God'” (Matthew 4:4).  He was quoting from Deuteronomy 8:3.  He quoted it with authority, and not once did He question its inerrancy.   The text he quoted, Deuteronomy 8:3, is significant.  That is where Israel is chastised for wanting food more than the verbal word of  God.   Israel failed a test in the wilderness because the word of God was not their comfort food.  So did Eve.  So did Esau.

When facing temptation, Jesus said that the written word of God, the Bible, is His food.  He resisted Satanic bait by finding comfort in the word of God.  To God’s people God’s word is always comfort (Psalm 19:10; Psalm 119:50).  In quoting from Deuteronomy, Jesus passed the test and was obedient on our behalf.

He also set the example.  If you want to be like Jesus, you’ll uphold the authoritative and inerrant word of God — the Scriptures — as your comfort food.  You will live by every word that comes from the mouth of God.

And, get ready, because Satan will mock you for doing so.