Bruxy Cavey is a pastor who has said some very bad things about the Bible.

A little while ago, I listened to a podcast his church, The Meeting House, released.  It is a conversation between Bruxy Cavey and two former bishops of his denomination, the BIC.  They discuss their denomination’s doctrinal statement.  The men make a few good points in the discussion.  But mixed with the good points are some very slippery statements.  As I said earlier, an otherwise clear and dry country road becomes hazardous with only a few feet of black ice.   The same can be said of their podcast, but it has more than one hazard.

Doug Sider, who is the executive director of BIC Canada, admits that he believed in the inerrancy of the Bible way back when he started in ministry.  Over time, he has shifted.

When I took office, as, as, as what you call it, “bishop,” umm, I did a bad thing.  I pulled up my credentialing file, and I thought I wanna see what I wrote 25 years ago.  And I wrote, I used the word, “inerrant,” as would have been, you know, my training, it would have been what I kinda understood.  What’s been interesting is in the 20 years since, as my view has nuanced and shifted, and some would say “liberalized”…  (48:28).

Somehow, Sider’s view has “nuanced,” “shifted,” or “liberalized.”  What he has shifted to we do not know.  We know what Sider has shifted from.  He’s shifted from the view that Bible is inerrant, but we’re left wondering what he actually does believe. 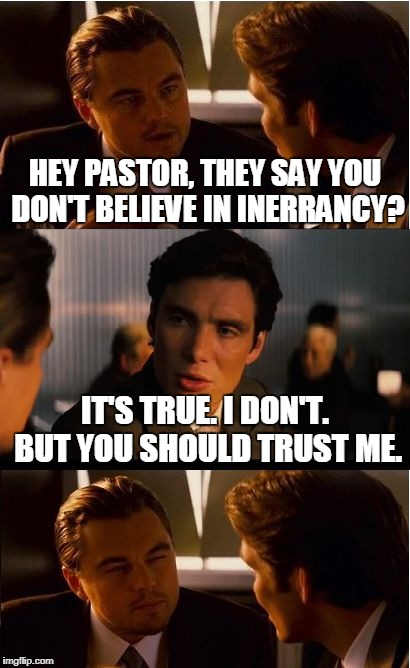 In all fairness, Sider didn’t say the Bible is not inerrant.  He only said he’s shifted, nuanced, or liberalized from inerrancy.

When it comes to the inerrancy of Scripture, there are three possible positions: (1) The Bible is inerrant, (2) The Bible is errant, or (3) we don’t know.  If you “shift” from believing that the Bible does not have errors, you’ve “shifted” into either not knowing what to believe or to believing it has errors.  Either way, you’ve now shifted into the realm of not being able to confidently trust all the Bible.  Either you question if you can trust it all, or there are parts you don’t trust at all.  A departure from the Land of Inerrancy is a one-way trip to the Land of Lack of Trust.

Doug Sider has shifted from the Land of Inerrancy. We know that much.

Bruxy Cavey has vacated the Land of Inerrancy.  He has spoken of the errancy in the New Testament.  He’s said that a faith based on “Scripture as inerrant” is “a house of cards.”  And he’s called the authority of Scripture “unscriptural,” “weird,” and “made up.”

The other man in the conversation is Darrell Winger.  He’s on staff at The Meeting House.  From comments he made, he’s somehow with the other two men also.

Darrell Winger summarized the discussion with a request to the broader church community:

So I would say I think we can trust one another within the broader church community, trust each other.  Let’s trust one another.  As you said earlier, let’s understand our heart.  And let’s look at the fruit of that, and um, rather than sort of becoming rather focused on words, such as, “inerrancy” or “infalibility” (52:12).

They don’t want us, the broader church community, to become focused on inerrancy and infalibility.  Instead, we should trust each other.  Again, he reemphasized:

So I think, I think we should say “trust us” to that we are endeavouring to follow Jesus as closely as we can, instructed by Scripture, empowered by the Spirit, in community together (53:10).

They would not say, “Trust that every word of the Bible is inerrant.”  But we hear, “Trust us.”  See the irony?