I remember the seeker-sensitive movement.  In the 1990’s evangelical churches began toning down their preaching in a pragmatic attempt to woo so-called seekers into their churches.  By leaving out the less culturally acceptable stuff from their sermons, they thought they’d become more culturally relevant.  Throw out the cherished and beneficial traditions of the church, water down the preaching, don’t talk about offensive things, and you’ll win the world.  The leaders of the movement maintained enough Christian beliefs to be considered doctrinally orthodox, but they often failed to transmit those beliefs to their followers.  At its heart, the seeker-sensitive movement was a sacrifice of the sufficiency of Scripture on the altar of pragmatism.

I believe that there is another movement afoot that is even more dangerous than the seeker-sensitive movement.  I call it the “heretic-sensitive movement.”  The leaders of this movement maintain enough orthodoxy to be considered evangelical.  Many of their leaders even reject the seeker movement wholesale, preach expository sermons, and claim to believe in the sufficiency of Scripture.  But they have taken the pragmatics of the seeker movement and applied them to their dealings with heretics or wolves.  Before I explain this movement further, I must acknowledge the reality of wolves. 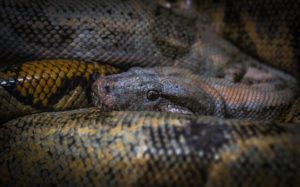 A wolf, in the context of the New Testament, is a false teacher who covers as a Christian.  He uses his cover to lead people away from the truth to a copycat Christianity, which is no Christianity at all.   The Bible is replete with exhortations to pastors to fight wolves.  At least once I underlined every single admonition in the pastoral epistles to defend against lies and protect the sheep from counterfeits: there was no shortage of ink on those pages when I finished.  Saint Paul warned the Ephesian elders to be on guard against wolves who will devour the flock.  Jesus stood up boldly to false teachers.  The prophets often spent their lives burning bridges with heretics while the false prophets were building bridges with the same.  Every generation has its wolves, and the true shepherds know they must fight them.  Today is not the exception.

Moving back to the heretic-sensitive movement, the proponents of this movement either make friends with wolves, compliment wolves, ignore wolves, pacify wolves, or do all of that together.  They do so for several reasons. They say things like, “You win more flies with honey than with vinegar.”  Thus reasoning that by their effeteness they will win wolves to their side, that is win them with their sweet words.  Like Neville Chamberlain with Adolf Hitler, they believe that evil can be defeated by fraternizing with an antichrist.  Others embrace this movement because they do not want to hurt their own reputation, and they yearn to be thought well of.  If they are nice to the heretics, they will keep their nice reputations and people will be more willing to come to their nice churches.  They might even reason that if they are really nice to the wolf some of the wolf’s own followers will leave the wolf and join the church of the heretic-sensitive pastor because he’s so nice.  All of this, much like the old seeker-sensitive movement, stems from a sincere desire to win friends and influence people.

First: The Heretic-Sensitive Movement Fails to Uphold the Example of Scripture

Saint Paul exhorted us to “Be imitators of me as I am of Christ” (1 Corinthians 11:1).  The pages of Scripture provide for us everything we need to know about shepherding.  Scripture not only promises that shepherds will fight wolves, but Scripture is our fight training manual.  We find instruction in the examples of pastors who fought wolves.  Paul called down the anathema of God upon the Galatian Judaizers (Galatians 1:9).  Jesus called down seven woes upon the Pharisees, labelled them “hypocrites,” “children of hell,” “blind guides,” “fools,” rotting dead men, and snakes (Matthew 23:1-36).  Jesus commends the prophets to us as examples because the prophets suffered for doing righteousness (Matthew 5:11), and He tells us the prophets suffered for how vociferously they opposed false teachers (Matthew 23:34-35).  These are our examples, and never never never do they ever ever ever attempt to win a wolf with honey.

The leaders of this movement believe that it is their job to use soft words to make wolves into sheep.  True shepherds understand that wolves, aside from a miracle of God, cannot be made into sheep.  True shepherds understand that their primary responsibility is their own flock.  While feeding their sheep the Word of God, they keep a watchful eye upon the terrain to discern the presence of wolves.  When the shepherd spots a wolf, he is decisive and courageous.  With thunder he alarms the sheep, and with fortitude he attacks the wolf.  The shepherd attacks, and he does not stop attacking until the sheep are safe.  The true shepherd believes that wolves exist, and he knows that wolves want his sheep dead.  He sees himself as a defender of the Bride of Christ against sweet-talking charlatans who are seducing her into adultery, whereas the heretic-sensitive pastor tries to sweet-talk the sweet talking charlatan into the Kingdom.  Many shepherds will never attack a wolf because they are not shepherds: they either do not believe in wolves, or they do not have the competency to identify wolves, or they are cowards in the face of wolves.  These shepherds cover up the true identity of wolves like much of the Roman Catholic hierarchy has covered up the identity of pedophiles.  Today, the Roman Catholic hierarchy are answering for their cover-up, and on the Day of Christ the heretic sensitive movement will likewise answer for being complicit in the defilement of the Bride of Christ by coddling the wolves who are presently ravishing her and calling the coddling  of wolves “love.”  These leaders fail to understand shepherding and actually show themselves to be hirelings.

Third: The Heretic-Sensitive Movement Fails to Follow the Way of the Cross

If the seeker-sensitive pastor attempted to woo goats into his fold, the heretic-sensitive pastor is attempting to woo wolves into his fold.  Like the seeker-sensitive leaders of old, he has sacrificed the sufficiency of Scripture on the altar of optical results.  In doing so, these leaders risk the souls of their own flock for the sake of their own reputation with the illusory hope of building the Kingdom of God by earning the praise of men.  They do not understand the glory of bearing reproach and the victory that comes by scorn and shame.  So beware of the heretic-sensitive movement. It just might achieve some numerical gains, but it will go down in history as a byword only to serve future generations as a smoldering example of what not to be.