An Evaluation of Bruxy Cavey’s Response to Criticism

Bruxy Cavey is at the center of what I believe is the most significant theological controversy Canadian Evangelicals have faced in almost 70 years. It is likely the most important controversy since the fundamentalist/modernist controversy. Once again, a generation must decide where it stands on some foundational issues, namely (1) the atonement, (2) Scripture, and (3) sexual ethics. This past Sunday, Bruxy Cavey at the start of his sermon attempted to address some of those issues. In what follows, I offer eight flaws with his response.

FIRST: HE DISMISSED THE CONCERNS AS COMING FROM A “THIN-STREAM”

This is false. Concerns about (1) the atonement, (2) Scripture, and (3) a biblical understanding of sexuality do not come from a “thin-stream.” Will Schuurman has aptly demonstrated here that Evangelicals have been defending penal substitutionary atonement from attacks by theological liberals since the rise of liberalism in the German seminaries centuries ago. As for Scripture, Jesus defended its inerrancy, sufficiency, and authority as it was attacked by the Pharisees (Matthew 5:17-20; Matthew 15:1-9). I’ve demonstrated here that the Church has held to biblical inerrancy and authority since the very beginning. As to a biblical understanding of sexuality, Saint Paul took his stand in Rome while a homosexual emperor there reigned (Romans 1), and he took his stand in Corinth (1 Corinthians 6:9), which was likely the most licentious city in the Empire. In the Middle Ages, the church compromised on sexual ethics, and St. Peter Damian (1007-1072 AD) wrote The Book of Gomorrah against church officials who’d compromised on sodomy. And, in our own context as you can see here, multiple Christian leaders spanning multiple denominations have been speaking out with concerns about Bruxy Cavey for some time now. This is not a small stream at all.

SECOND: HE INFERS THE CONCERNS ARE ONLY FROM CALVINISTS

Armininians have also raised concerns. As best as I can tell, the Christian brothers in the philosophy department at Tyndale University in Toronto are Arminian, and they have publicly refuted Bruxy Cavey’s woefully inadequate view of Scripture and aberrant view of the atonement with multiple blogs here. This is likely the second false claim by Bruxy Cavey.

THIRD: HE JOKES ABOUT THESE SERIOUS CONCERNS

This is a blatant display of arrogance and incorrigibility. A large number of Evangelical Christian leaders spanning several denominations have now raised concerns about Bruxy Cavey’s teachings (see here), and he simply dismissed those concerns with a joke: “We’re glad you’re here…at heresy central.” Not only does this display how tritely he’s taking these various serious charges, but it appears also to be a tool he’s using to disarm the concerns of his congregation. When you can’t actually honestly deal with the criticism, just disarm the people with some tomfoolery. Frankly, it reeks of an attempt to manipulate his people. 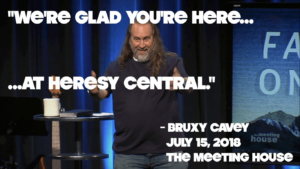 FOURTH: HE ACCUSES PEOPLE OF SAYING THE BIC IS A HERETICAL DENOMINATION

Has anyone actually said that? I haven’t. In fact, as I’ve noted here and here, some within the BIC have told me they have their own concerns about Bruxy Cavey. If people have not made this allegation, this could be the third false claim in his response

FIFTH: HE POORLY ADDRESSES CONCERNS ABOUT HIS VIEW OF THE ATONEMENT

Cavey claims he is fine with people who hold to penal substitutionary atonement. Whereas previously, he boasted that he’d like to convert people away from it and he’s charged his students not to preach it. The concern is that he outright denies penal substitutionary atonement along with the value of Christ’s redeeming blood (see here), and with that has taken a predatory posture towards those who believe the Gospel message.

SIXTH: HE AVOIDS THE CONCERNS OVER HIS VIEW OF SCRIPTURE

Cavey claims that the concern is that he doesn’t use the word “inerrancy.” That might be a small little concern, but as has already been demonstrated, the greater concerns—which he conveniently left out—are that he has called the Scriptures errant, has said the authority of Scripture is “made up” and “weird,” and has attempted to separate the authority of Christ from Scripture. Those concerns were originally, at least by me, publicly addressed here in February of 2017. It is now July of 2018. It should be noted that his denomination, the BIC, holds to the authority of Scripture, but Cavey has called the authority of Scripture “made up” and “weird.” Yet again, Cavey appears to have dodged the very serious charges that have come against him. I should also note that over in Tyndale University’s philosophy department, Dr. Rich Davis has shown here that Bruxy Cavey seems to be double-speaking in his pronouncements on biblical inerrancy.

SEVENTH: HIS MISREPRESENTS CONCERNS ABOUT HIS VIEW ON HOMOSEXUALITY

He says, “We are just too nice to gay people and Catholics.” Has anyone actually accused him of that? I haven’t, and I certainly have not heard anyone else do that either. Unless Cavey can point to someone who has actually said this, his statement here appears to be a direct violation of the 9th commandment: “You shall not bear false witness.” Not only is bearing false witness a very hateful thing to do, but telling lies earns people a place in the lake of fire (Revelation 21:8). I find this tactic to be particularly nefarious because up until now I have attempted to fairly represent Cavey with direct quotes from his own mouth and writings. To build a straw man and then resort to ad hominems against that straw man is very dishonest. The allegation against Cavey has consistently been that he has, with his third away approach and his now infamous homosexual apology video (which I wrote about here), compromised on what the Scriptures actually teach about homosexuality. He goes on to say, “Well, if you’re Catholic and gay, you’re not welcome at some churches.” I really hope he wasn’t talking about the church I pastor, Trinity Bible Chapel. Like Corinth, we have former homosexuals and idolaters who have been reconciled to God by the atoning blood of Jesus Christ (1 Corinthians 6:9-11). We are very loving to all people who walk through our doors, and we accept all forgiven sinners as brothers and sisters in the Lord.

EIGHTH: HE HIDES BEHIND C.S. LEWIS AND N.T. WRIGHT

Bruxy Cavey can have N.T. Wright. We don’t want him, at least at Trinity Bible Chapel we don’t. As John MacArthur has helpfully explained here, “N.T Wright is N.T. Wrong.” As for C.S. Lewis, we should recognize that he never claimed to be an Evangelical, and Martin Lloyd-Jones warned against Evangelicals who take him as a “patron saint.” That said, we should be very careful here. C.S. Lewis was very helpful for Evangelicals in many regards. I have at my disposal almost every single thing C.S. Lewis has ever written about Scripture and the atonement, and I hope to write about that at some time in the next few months. When I do, I think we all will be a tad surprised. Suffice it to say for now, this move is only a failed attempt to normalized Cavey’s failed theology.

Thus I offer eight very serious problems with Bruxy Cavey’s public response to the very serious theological charges that have been made against him. The more I listen to him and read his material, the more I believe that the man is a master magician. I am convinced that he plays with words and phrases like magicians play with cards. It is not unlike the way Satan played with words when he used his charm to deceive Eve in the Garden. With all that said I conclude with the firm conviction that Bruxy Cavey’s response to the serious theological charges that have been made against him amounts to smoke and mirrors at what he has so aptly termed “heresy central.”