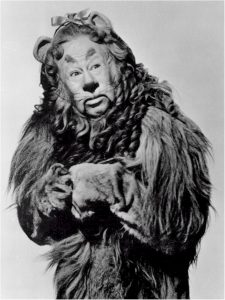 That’s rather unfortunate because the Bible doesn’t call cowardice “kind,” “nice,” or “loving.”  No, the Bible calls it “sin.”  It’s right up there with porneia, murder, and lying.  In fact, the cowards are mentioned first in a list of sinners who “will be in the lake that burns with fire and sulfur” (Revelation 21:8).

John Gill says cowards are “they that are afraid of the beast and live in servile bondage to him.”  That’s an excellent way to put it.  They play politics with the beast’s anger.  They say as much as they can get away with, but they know the line they cannot cross.  The beast carves out some space, and he allows them to speak within the boundaries of that space.  So where the beast grants permission, the cowards speak boldly and call it “courage.”  They fear speaking outside that boundary.  So they don’t, and they call it “wisdom” or “meekness” or something else really pious.  Truly it’s cowardice.  Whoever scares you away from speaking truth is the beast to whom you cower.

As per Matthew Henry, “They could not burn at a stake for Christ, but they must burn in hell for their sin.”   One of the first Scripture verses I memorized is Matthew 10:28.  “Do not fear those who kill the body but cannot kill the soul.  Rather fear him who can destroy both soul and body in hell.”  Cowards are the ones who  fear the wrong thing too much and the right thing too little.  Imagine a guy standing on the side of a superhighway who sees a spider in the ditch.  To escape the spider, he runs into the highway.  Later they scrape his body off the asphalt because he feared the spider too much and the highway too little.  Sure, the spider might bite, but the Peterbilt weighed 80,000 lbs and was moving at a speed of 110 km/hr.  He feared the spider, but the truck killed him.  The coward fears the mob’s reaction, but God will send him to hell.

Paige Patterson was a key player in the Southern Baptist Conservative Resurgence.  He played the man, and, with some other faithful pastors, he rescued the SBC from theological liberalism.  At the very heart of the controversy were denominational leaders who did not believe in biblical inerrancy.  It was a battle for the Bible.  Pastor Tom Ascol once reminisced about a conversation he had with Dr. Patterson during the controversy:

In 1980, when I was still a seminary student and just coming to understand the issues at stake in the denominational struggle, Dr. Patterson gave me a few hours of his time at his study in Dallas. When I asked him what he had learned thus far in his efforts to bring these issues to light, he said, “I have learned what I would never have imagined to be true–that so many Southern Baptist pastors are cowards.” He went on to explain that a common refrain he was hearing went like this: “I am with you, brother. I believe in inerrancy and think we need to take a stand, but because of my position, I am not able to come out and speak on this openly.”

Dr. Patterson was willing to risk name and position for the sake of the Gospel.  Other pastors were content to watch him while privately affirming his convictions.  He called them “cowards.”  A coward is one who knows what is right, has the ability to do the right, but who finds a really sanctimonious reason to avoid the cost of doing right.

I think that’s probably why it’s so easy to be a coward.  It’s typically not a sin of commission, but rather a sin of omission.  Anyone can identify adultery.  Adultery is committed.  It’s difficult to refer to adultery with a sanctimonious platitude.  The same is true with murdering or stealing.  But cowardice is an action omitted.  It’s seeing a problem that must be dealt with while omitting action.  It’s being quiet when you should speak, and being quiet is often called “wisdom.”  It’s sleeping when you should be awake, and everyone sleeps now and then.  The omitting is easily sanctimoniously dismissed as “kindness” or “niceness” or “wisdom.”

This is likely the greatest sin of the Canadian church.  People are cowards, and they call it “being nice” or “earning a hearing” or “being wise.”  I once spoke with a Christian leader who privately believes that sodomy is sin, but he won’t say so publicly because that would be “divisive” in his Christian organization.  How noble of him.  I know of pastors who’ve been caught in sexual immorality, but the leaders around them quietly and quickly restore them to leadership because that’s “gracious.”  How loving.  I once had a pastor tell me to apologize for some true things I said because apologizing would show “meekness” to people I angered.  How humble.  And there are countless others who refuse to open their mouths, and they say it’s wiser to remain silent than shine light in darkness.  Men are cowards, and they call it “godly.”  How sanctimonious.

Yes, the sin of cowardice has a great reputation.  If we want to lead this soft and effete nation to repentance, the repentance must start in the house of God.  Until then, Christians are part of the problem.